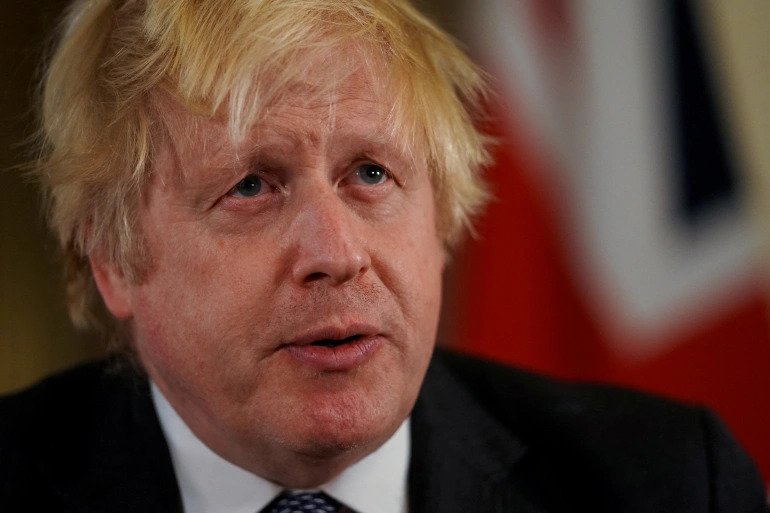 Boris Johnson is facing calls from senior Tories to resign after he admitted attending a drinks party during lockdown.

The prime minister apologised for the way he handled the event in the Downing Street garden in May 2020 and said he understood the public’s “rage” over it.

Mr Ross, an MP and a Member of the Scottish Parliament, said he had had a “difficult conversation” with Mr Johnson after he apologised on Wednesday in the House of Commons.

He said he would write to the 1922 Committee, which organises Conservative leadership contests, to register his lack of confidence in the prime minister.

“He is the prime minister. It is his government that put these rules in place, and he has to be held to account for his actions,” Mr Ross said.

Commons leader Jacob Rees-Mogg said those calling for Mr Johnson were “people who are always unhappy” and dismissed Scottish Conservative leader Douglas Ross as “quite a lightweight figure”.

Conservative MP Andrew Percy criticised Mr Rees-Mogg, saying: “As someone who apparently loves the Union, his personal attack on Douglas… is a gift to the petty nationalists in the SNP who want to break this country up.”

A minimum of 54 Conservative MPs must send letters to the committee in order to trigger a leadership challenge.

The drinks gathering, held on 20 May 2020 and described in the invitation as “socially distanced”, was attended by around 30 people, who were invited to bring their own alcohol. Food, including sausage rolls and crisps, was reportedly laid out on trestle tables,

Mr Johnson admitted at Prime Minister’s Questions on Wednesday that he had joined colleagues at the event for around 25 minutes to “thank groups of staff” for their hard work during the pandemic, but had “believed implicitly that this was a work event”.

He added: “With hindsight I should have sent everyone back inside. I should have found some other way to thank them, and I should have recognised that – even if it could have been said technically to fall within the guidance – there would be millions and millions of people who simply would not see it that way.”

Ministers have urged MPs to wait for the outcome of an investigation by senior civil servant Sue Gray into alleged Covid-rule breaking at Downing Street parties, which is expected be published next week.

Northern Ireland Secretary Brandon Lewis told BBC Breakfast: “You’ve got to let these investigations get to the full details and the full facts.”

He said the prime minister recognised the “frustration, anger and upset” about what people perceived to be happening at Downing Street, adding he “absolutely” supported his leadership.

“I don’t think it should be left to the findings of a civil servant to determine the future of the prime minister and indeed who governs this country,” he told BBC Radio 4’s PM programme.

And fellow Tory Caroline Nokes, who chairs another Commons committee, said the prime minister should resign now as he was “damaging the entire Conservative brand”.

The former minister, who has previously been critical of Mr Johnson’s leadership, told ITV’s Robert Peston: “Regretfully, he looks like a liability. And I think he either goes now, or he goes in three years’ time at a general election.”

What next for Boris Johnson?

The prime minister’s admission and apology in the Commons likely bought him a little time.

A pause until the official inquiry into what parties did or didn’t take place in Downing Street is published, in perhaps a week or so.

But for many on his own side, Boris Johnson has already lost the benefit of the doubt.

Growing numbers of his own MPs want him out, discussing frantically how and when his exit could take place.

At Prime Minister’s Questions, Labour leader Sir Keir Starmer said Mr Johnson’s explanation for his attendance at the drinks gathering was “so ridiculous that it’s actually offensive to the British public” and he called on Mr Johnson “to do the decent thing and resign”.

The SNP’s leader at Westminster, Ian Blackford, called on Tory MPs to force the prime minister out.

And Lib Dem leader Sir Ed Davey, who has asked the Metropolitan Police to investigate Mr Johnson’s attendance at the drinks, said he had to go.

The prime minister’s statement was met with a mixed reaction from Conservative MPs, with Dan Poulter saying it was “not much consolation” for those who had worked on the frontline in the NHS.

Ms Truss said she stood behind the prime minister “100%”, while Mr Sunak said Mr Johnson had been “right to apologise”, adding that he supported the PM’s call for “patience” while Ms Gray completed her investigation.

A poll for The Times by YouGov, carried out before Mr Johnson’s apology at Prime Minister’s Questions, gave Labour at a 10-point lead over the Conservatives – the party’s biggest lead since December 2013.

Moon wants to formally end the Korean War. Can that bring peace?