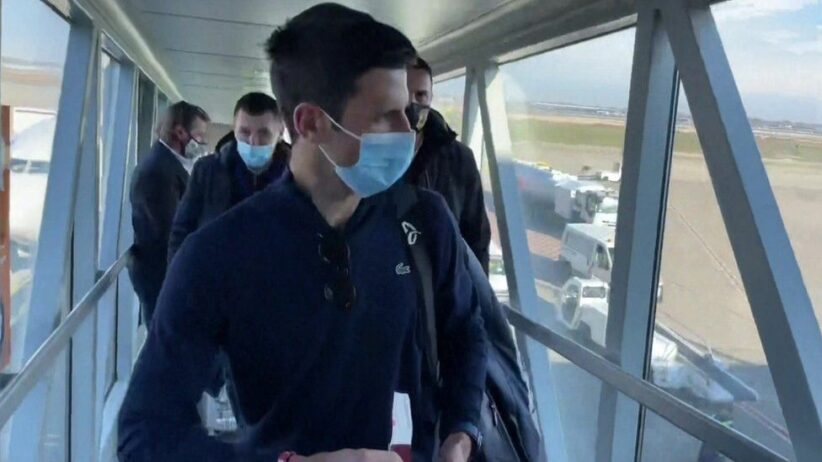 Novak Djokovic has arrived in Serbia after being deported from Australia.

The top men’s player was deported on Sunday after losing a visa battle that centred on the fact he is unvaccinated.

This year’s Australian Open tournament, which has been overshadowed by the player’s visa troubles, began in Melbourne on Monday.

Djokovic had been scheduled to play later in the day, the dramatic deportation ended his hopes of winning a record 21st Grand Slam title.

Under Australia’s immigration laws, Djokovic, 34, cannot be granted another visa for three years.

But Prime Minister Scott Morrison has said he may be allowed entry sooner under the “right circumstances”.

“[The ban] does go over a three-year period, but there is the opportunity for them to return in the right circumstances and that would be considered at the time,” he said in an interview with the Australian radio station 2GB on Monday.

Australian law does provide for compelling or compassionate reasons for the three-year visa ban to be waived.

This would potentially allow Djokovic to take part in the Australian Open tournament next year.

How did the 10-day saga reach a climax?

Djokovic was forced to leave Australia after judges upheld a decision by Immigration Minister Alex Hawke to cancel his visa on public health grounds.

The decision marked the end of a tumultuous period where the Serb fought to stay and defend his title.

He was originally granted a medical exemption to enter Australia by two different independent health panels – one commissioned by Tennis Australia, the other by the state government of Victoria – after testing positive for coronavirus in mid-December.

But the player’s attempt to enter the country without being vaccinated stoked public anger.

The Australian Border Force then detained him on 5 January for not meeting coronavirus requirements and his visa was revoked.

A judge overturned that decision last Monday, but the government stepped in several days later to revoke the visa yet again.

The legal battle reached its conclusion on Sunday when judges upheld the government’s decision, leaving Djokovic with no other option but to leave the country.