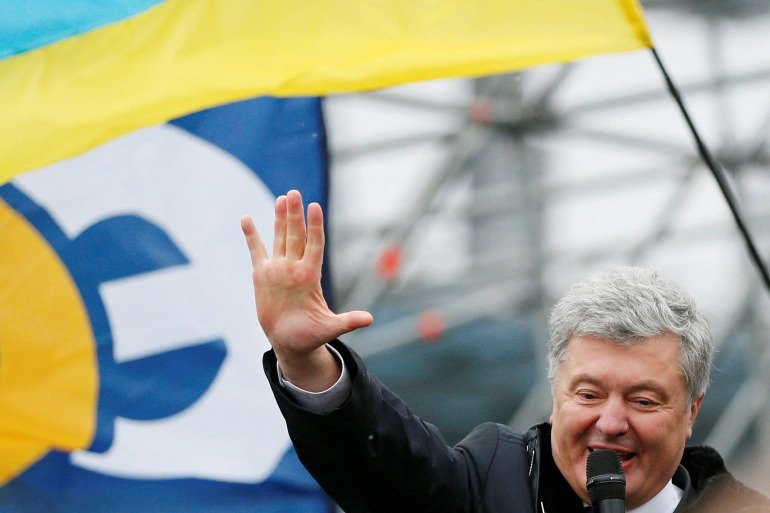 Ukraine’s former president Petro Poroshenko has returned to Kyiv to face treason charges in a criminal case he claims was fabricated by the allies of his successor, Volodymyr Zelenskyy.

Poroshenko arrived at Zhuliany Airport in the Ukrainian capital on Monday having travelled from Warsaw and was greeted by thousands of cheering supporters.

His return sets up a showdown with Zelenskyy’s government in what observers say is an ill-judged distraction at a time when Ukraine is bracing for what it fears may be an imminent Russian military offensive and appealing to Western allies for support.

The former leader, one of Ukraine’s richest businessmen, had been outside of the country for weeks, meeting with leaders in Brussels, Berlin and other European capitals.

In a brief standoff at border control, Poroshenko accused border guards of confiscating his passport. He later emerged to a crowd of flag-waving supporters outside the airport.

Poroshenko is expected to head straight to court, where he faces a ruling on whether he will be remanded in custody pending investigation and trial.

At a separate briefing, Ukrainian investigators said they had tried to serve a subpoena to the 56-year-old, who refused to take the documents.

A prosecutor has alleged that Poroshenko was involved in the sale of large amounts of coal that helped finance Russian-backed separatists waging conflict in eastern Ukraine in 2014-15.

Poroshenko’s assets have been frozen as part of a probe into the allegations of high treason. He faces up to 15 years in prison if convicted.

Poroshenko insists that he is innocent. He accuses Zelenskyy of seeking to discredit him politically to distract from Ukraine’s widespread problems, including economic woes and rising deaths from COVID-19.

The charges are the latest in a string of accusations levelled against scandal-hit Poroshenko, who has a mixed record on reforms, since Zelenskyy defeated him in a 2019 election.

The allegations have generated concerns of undemocratic score-settling and also alarmed Ukraine’s allies.

Zelenskyy says he is waging a fight against oligarchs that is aimed at reducing their influence in Ukraine’s political and economic life.

Poroshenko’s supporters view the charges against him as politically motivated.

“It is a revenge of the authorities and an attempt by Zelenskyy to eliminate his biggest rival in Ukraine’s politics,” Anton Ivashchenko, 42, told The Associated Press at the airport.

“Persecution of Poroshenko sows animosity and discord among those who push for … Ukraine’s closer ties with the West.”