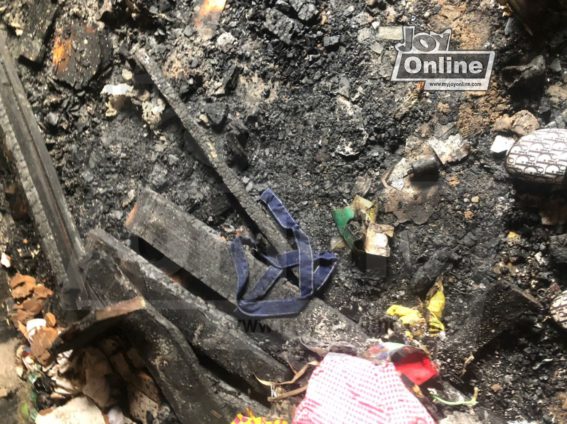 A pastor with the Mega Word Chapel International, Kenneth Mensah, has allegedly set ablaze the house of one of his congregants after stealing an amount of ¢40,000 from the victim.

The victim, Rosemond Amoafo, is reported to have been planning to travel to the United Kingdom when she was attacked by the suspect.

Narrating the incident, Joana Asare, a daughter of the victim said the cleric had become a friend to the family due to his frequent visit to their home to spiritually prepare her for the trip.

She told journalists that Rosemond had extensively discussed her intention to travel with her extended family and they had pledged to support her by agreeing to sell a store that they owned.

According to Joana, ¢40,000 was raised and was given to Rosemond to embark on her journey.

However, Rosemond informed her pastor, Kenneth Mensah, about it.

The pastor then convinced Rosemond into believing that her senior sister, Rebecca Amoafo is a witch.

He later told her that there was a need for a spiritual direction on the money given her by the family, otherwise, she will not reach her destination [UK].

Pastor Mensah then came to Rosemond’s house at Kwesibokro, a suburb of Asankragua on January 10, and slept over.

On Tuesday, the suspect asked her to recite certain words on the money and also gave her a concoction to drink.

Joana Asare said her mother dozed off after taking the potion.

The suspect is believed to have capitalised on the moment to make away with Rosemond’s ¢40,000.

It is reported that he also locked the door and set the house ablaze.

However, the victim survived due to the timely intervention of the National Fire Service.

He also promised that the Police will leave no stone unturned in their search to bring the suspect to book.

“We have put up his pictures and the name of the church in the public domain and are asking people to help us arrest him,” he said.

The Officer also cautioned residents in Asankragua to be careful with pastors and their deceitful nature.

“Report any foul means of a pastor,  to the nearest Police station if you suspect any,” he added.