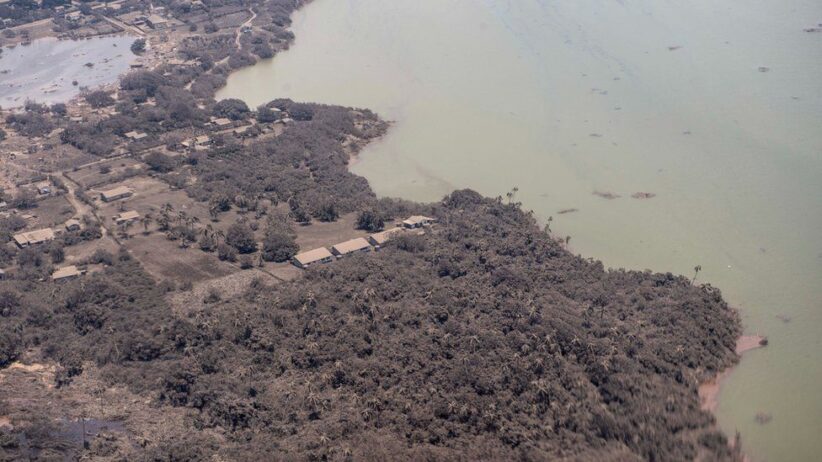 Ash cloaking a runway has hampered relief efforts to Tonga, as the scale of the damage from a volcanic eruption and a tsunami becomes clear.

New Zealand is trying to send clean drinking water and other supplies but planes cannot land at the main airport.

Two people have been reported dead, but with communications limited there are fears the true toll could be higher.

An underwater volcano erupted on Saturday, showering Tonga with ash and triggering a tsunami.

Tonga is made up of more than 170 islands scattered over an area of the South Pacific roughly the size of Japan. Just over 100,000 people live in Tonga, the bulk of them on the main island of Tongatapu.

The UN reported extensive damage to property on western beaches of Tongatapu. In the capital Nukuʻalofa, the New Zealand High Commission said aside from the waterfront, the area is largely undamaged.

But there are concerns about the Ha’apai group of islands, which lies north of Tongatapu.

Surveillance flights showed an entire village destroyed on one island and buildings flattened on another.

“Possibly there will be more deaths and we just pray that is not the case,” he said.

On Tuesday New Zealand foreign affairs minister Nanaia Mahuta said that “water is among the highest priorities for Tonga at this stage”. Aid agencies say it is likely that volcanic dust and the tsunami had contaminated Tonga’s water supplies.

But the ash, that has turned Tonga’s normally lush green landscape into a muddy brown, needs to be cleared before New Zealand’s planes can land.

A group of Tongans have been sweeping the ash off the runway, 1News reported. It is likely to take at least until Wednesday before the runway is clear.

Settlements on Tonga no longer visible after eruption

Communications with the island chain have been disrupted after the single underwater cable connecting Tonga to the rest of the world was severed in the eruption.

Tongans living abroad have been anxiously waiting for news from relatives and loved ones back home, as reports say it may take up to two weeks to restore phone and internet lines.

The Red Cross said even satellite phones, used by many aid agencies, had poor service due to the effects of the ash cloud.

The eruption was felt as far away as in the US. In Peru, two people drowned in abnormally high waves while beaches near the capital Lima were closed off following an oil spill.