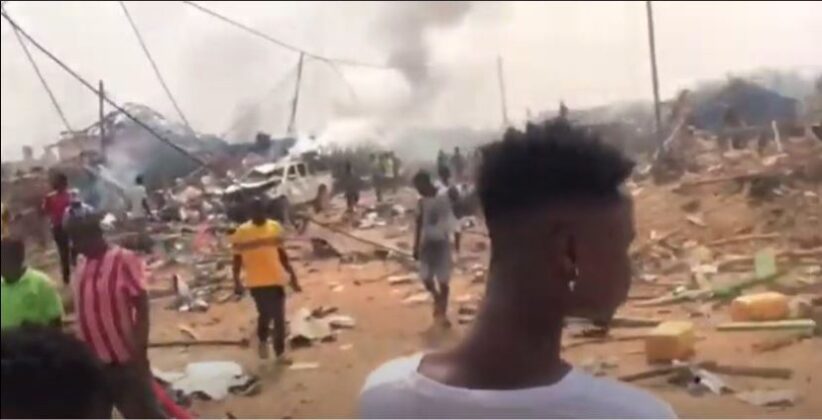 As at 5pm Thursday, a total of 17 people had been confirmed dead in the Appiatse explosion, in the Bogoso District of the Western Region, according to the Ministry of Information.

The incident which occurred as a result of an accident involving a truck conveying explosives for a mining company, a motorcycle and a third vehicle close to an electricity transformer, reduced the town of Appaitse to rubble, killing inhabitants and injuring scores.

According to the Ministry, following the activation of a National Emergency Response Mechanism which saw personnel from the Police Service, Fire Service, the Municipal Authority and residents moving to help, about 59 injured people have been rescued from the rubble.

This brings to 76, the number of persons known, so far, to have been affected by the tragedy.

Out of the 59 injured persons, 42 are receiving treatment and some are in critical condition.

Additional personnel and resources have been dispatched to the community to support the ongoing response effort, the Ministry stated.

“An alternative route has been created to facilitate the movement of stranded vehicles plying that route. All hospitals within the vicinity are being used to treat injured persons, and an evacuation plan has been activated to move those in critical condition to medical facilities in Accra so they can get the needed assistance,” the statement added.

The Ministry’s statement further mentioned that to forestall a secondary explosion at the site, a joint team of police and military explosion experts have been deployed to examine the situation and put in place requisite measures.

Meanwhile government has indicated that some efforts to get stranded community members shelter and other basic necessities in the days ahead have been set in motion.

Also, the government has commended the Police Service, Fire Service, National Disaster Management Organisation (NADMO), Ghana Health Service, National Ambulance Service, and the Municipal Authority, health professionals in the medical facilities within the vicinity, and local residents for their assistance so far.

“Government further expresses deep condolences to the families of the deceased and sends best wishes to the injured for their speedy recovery. As relief and containment efforts continue, and the situation is brought under considerable control, President Akufo-Addo will visit Appiatse to assess the effectiveness of the response effort,” it concluded.