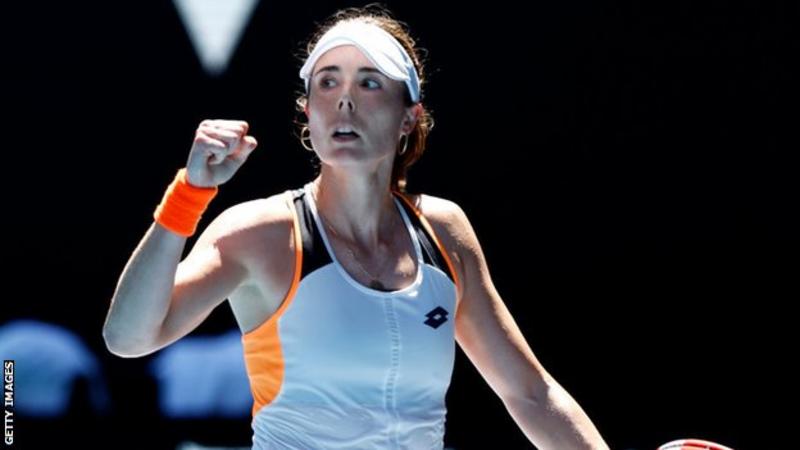 Two-time Grand Slam winner Simona Halep is out of the Australian Open, losing in three sets to France’s Alize Cornet in hot conditions in Melbourne.

World number 61 Cornet will face American 27th seed Danielle Collins for a place in the semi-finals.

“To go to my first quarter-final is just a dream come true, I don’t know what to say, it is just magic,” said 32-year-old Cornet.

“I think I just stopped thinking, after 30 minutes of playing my brain was already overloaded, my vision wasn’t clear any more and my hands were shaking but on the other side of the court she was not feeling much better than me.

“This is why I keep playing tennis, it’s for this moment when I can share all these emotions on the court with you. The journey goes on and I can’t quite believe it.”

Poland’s Iga Swiatek, the seventh seed, fought back from a set down to beat Romania’s Sorana Cirstea 5-7 6-3 6-3 and reach the Australian Open quarter-finals for the first time.

Swiatek, 20, won the French Open in 2019 and has now reached the last eight in three of the 12 Grand Slam events she has played.

She lost the opening set, the first she had dropped in the tournament, but gained the decisive break in the sixth game of the second set.

Cirstea, ranked 38th in the world, missed four chances to break Swiatek’s serve in the fourth game of the deciding set and that proved crucial as Swiatek then broke in the fifth and seventh games on her way to victory.

Swiatek was overcome with emotion at the end of the match and said: “For me a week without crying is not a week. My stress level was higher than the previous [matches].

“It started with being off the rhythm and after the first set I was a little bit shaking.

“She was really putting pressure on, returning in front of the baseline – she was playing as fast as my serve was. I just had to be on my toes.”

Swiatek, who is writing columns for the BBC Sport website throughout the tournament, plays either Belarusian second seed Aryna Sabalenka or Estonian Kaia Kanepi in the quarter-finals.

Halep, 30, had won the Adelaide WTA event in the build-up to the tournament and breezed through her opening three matches at the Australian Open for the loss of just 12 games in total.

Playing her sixth fourth-round match at a Grand Slam, Cornet edged an opening set that featured five breaks of serve, with Halep going long with a forehand on set point.

Cornet appeared in control as she recovered from an opening break to take a 3-1 lead in the second set, and had a point to go up 4-1, but the determined Halep battled back in impressive fashion, winning five consecutive games to level the match.

With both players tested by long rallies in the sweltering heat, Cornet roared and Halep threw her racquet in frustration as the French player survived a break point to hold for 3-3 in the deciding set.

And, in her 63rd career Grand Slam appearance, Cornet ultimately delivered the decisive blow in the following game, winning four points in a row from 30-0 down.

Despite being unable to take two match points on Halep’s next service game, Cornet took her third on her own serve and sank to her knees after sealing a memorable victory.

Second Mexican journalist killed in Tijuana in less than a week