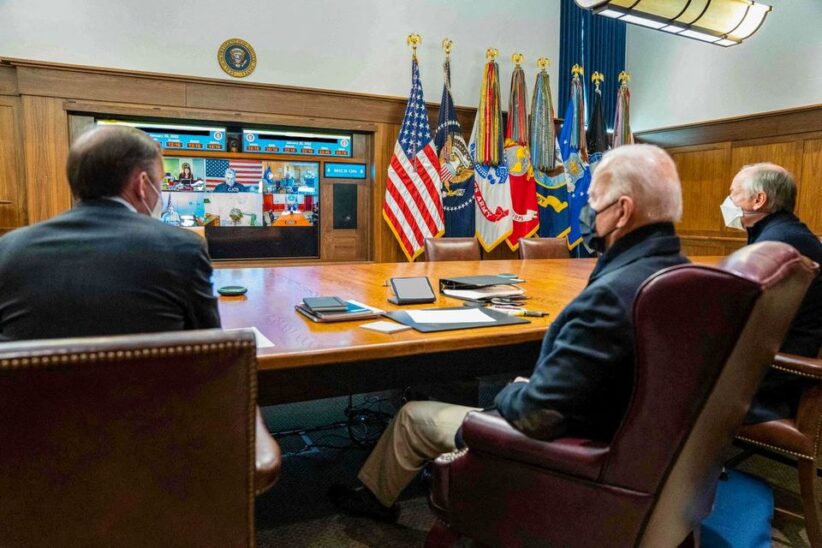 U.S. President Joe Biden has threatened to impose devastating sanctions on Russia if leader Vladimir Putin invades Ukraine, but some big companies and business groups are pushing the White House and lawmakers to be cautious.

A trade group representing Chevron, General Electric and other big U.S. corporations that do business in Russia is asking the White House to consider allowing companies to fulfill commitments and to weigh exempting products as it crafts any sanctions. At the same time, big energy companies are pushing Congress to limit their scope and time frame.

The Biden administration and Congress need to “get the details right in case they must follow through on the threat of sanctions,” Jake Colvin, president of The National Foreign Trade Council, told Reuters Monday.

“Those details should include consideration of safe harbors or wind-down periods to enable companies to fulfill existing contracts and obligations, as well as carve-outs for lifesaving medicines and other humanitarian considerations consistent with longstanding U.S. policy,” Colvin said.

Energy companies have also reached out directly to U.S. lawmakers to press for a “cool down” or “wind down” period so their assets are not seized if they are unable to fulfill business agreements in Russia, a congressional aide told Reuters.

The American Petroleum Institute, the largest U.S. lobbying organization for oil and gas drillers, has discussed sanctions on Russia with congressional offices. “Sanctions should be as targeted as possible in order to limit potential harm to the competitiveness of U.S. companies,” an API spokesperson said.

But in this case, the sanctions are likely to be applied suddenly, in the middle of a crisis, making a “wind down” period more difficult to secure, he said.

The U.S. Treasury in the past has provided some mitigation measures on financial sanctions, such as granting licenses protecting senders of humanitarian aid and personal remittance flows to Afghanistan despite sanctions against the ruling Taliban.

A U.S. Treasury official declined to comment on any such measures regarding potential sanctions against Russia, but added: “We are prepared to deliver severe costs to the Russian economy while minimizing unwanted spillover.”

Oil companies felt the aftermath of the U.S. sanctions on some of Russia’s more expensive drilling operations for years after Putin invaded Crimea in 2014.

The measures forced Exxon Mobil (XOM.N) out of Russia’s Arctic and ended the company’s collaboration with Russian state oil company Rosneft (ROSN.MM), with which it signed a $3.2 billion deal in 2011 to develop the region.

Exxon’s argued the sanctions, which slowed work on a major discovery in the Kara Sea above the Arctic Circle, unfairly penalized U.S. companies while allowing foreign companies to operate in the country, one of the world’s largest oil producers.

The 2014 sanctions hit the easiest targets in Russia’s high-tech exploration oil and gas projects in the Arctic, Siberian shale and deep sea.

New sanctions could be broader, but also tricky to pull off without damage to Western companies.

One possible “safe harbor” measure could protect companies from legal liability for sanctions violations if certain conditions were met, said Reinsch, such as showing that a shipment went to the sanctioned country without permission, perhaps from a third country.

Exxon did not immediately respond to a request for comment about any lobbying it is doing on the potential Russia sanctions.

A spokesman for the U.S. Chamber of Commerce, the largest lobbying group for American business, declined to comment on the topic.

U.S. goods and services trade with Russia totaled an estimated $34.9 billion in 2019, according to the U.S. Trade Representative’s office.

Corruption fight: Agyeman-Manu should not be in office – Manasseh