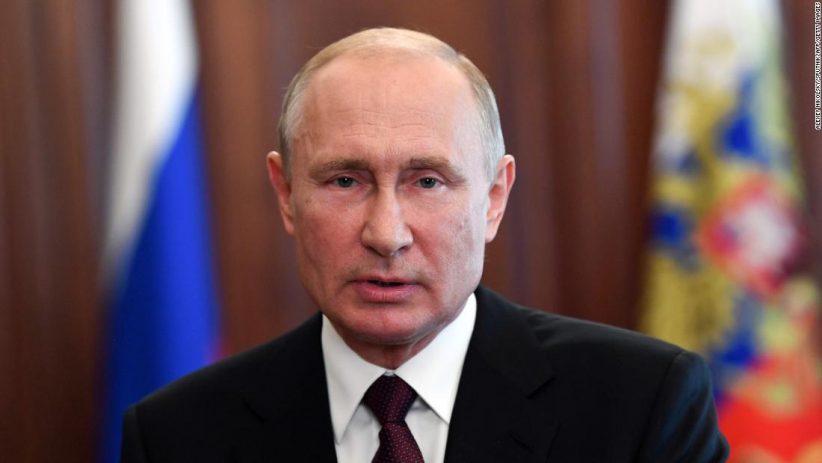 Mr Biden said there would be “enormous consequences” for the world if Russia made a move on the nation, which sits on its south-western border.

His comments came as other Western leaders repeated warnings that Russia would pay a heavy price for invasion.

Russia has accused the US and others of “escalating tensions” over the issue and denies planning to enter Ukraine.

However, Moscow has deployed an estimated 100,000 soldiers near the border.

The Kremlin has said it sees the Western military alliance Nato as a security threat, and is demanding legal guarantees that it will not add new members further east, including neighbouring Ukraine. But the US has said the issue at stake is Russian aggression, not Nato expansion.

Fears of invasion have prompted Western embassies in Kyiv to withdraw some personnel.

Diplomats from Russia, Ukraine, Germany and France will gather in Paris on Wednesday for talks about the ongoing tensions.

Taking questions from reporters on Tuesday, Mr Biden replied “yes” when asked whether he could see himself imposing sanctions on the Russian president personally in the event of an invasion.

Such a move across Ukraine’s border would mean “enormous consequences worldwide” and could amount to “the largest invasion since World War Two”, he said.

In the past the US has imposed sanctions on foreign leaders including Syrian President Bashar al-Assad, Venezuela’s Nicolás Maduro and former Libyan leader Muammar Gaddafi. Measures included blocking property and transactions related to the leaders’ respective countries.

Mr Biden added that he would feel obliged to beef up Nato’s presence in eastern Europe if Russia invaded. But he repeated that there were no plans to send US troops to Ukraine itself.

On Wednesday UK Foreign Minister Liz Truss echoed Mr Biden’s words, telling the BBC’s Today programme that the government has “ruled nothing out” – including sanctions against the Russian leader – and said the UK is looking to “toughen up” its sanctions on people, banks and businesses.

“What is important is that all of our allies do the same. It is by collective action. By showing Putin we’re united, we will help deter a Russian incursion,” she said.

The country has also accused the US and NATO of “flooding” Ukraine with weapons and Western advisers.

The US has already put 8,500 combat-ready troops on alert to deploy at short notice – partly to help reinforce Nato allies – which Russia said caused it “great concern”.

Washington has also warned Russian ally Belarus that it would “face a swift and decisive response” if it assists in an invasion.

During crisis talks on Monday, Western powers agreed to “unprecedented” sanctions against Russia if it were to invade.

UK Prime Minister Boris Johnson said on Tuesday that the Western allies would respond to any incursion with “severe” economic sanctions, adding that Britain was prepared to deploy troops to protect Nato allies in the region.

He raised the issue of banning Russia from the Swift international payments system, a move which senior Russian officials said meant Europe would not be able to pay for and receive Russian products.

He would speak by phone to Mr Putin on Friday, he added, and seek clarification about Russia’s intentions towards Ukraine.

Separately, Mr Biden’s administration said it was working with oil and gas suppliers around the world to boost shipments to Europe in the event of Russia cutting off supplies, the New York Times reports.

Russia currently provides about one-third of the crude oil and gas imported by the European Union.

Ukrainian President Volodymyr Zelensky tried to reassure his nation in a TV address on Tuesday.

“There are no rose-coloured glasses, no childish illusions, everything is not simple… But there is hope,” he said. “Protect your body from viruses, your brain from lies, your heart from panic.”

Russia seized Ukrainian territory before, when it annexed Crimea in 2014. After Russian forces seized control, Crimea voted to join Russia in a referendum the West and Ukraine deemed illegal.

Russian-backed rebels also control areas of eastern Ukraine near Russia’s borders. That conflict has cost an estimated 14,000 lives, with a 2015 peace deal a long way from being fulfilled.