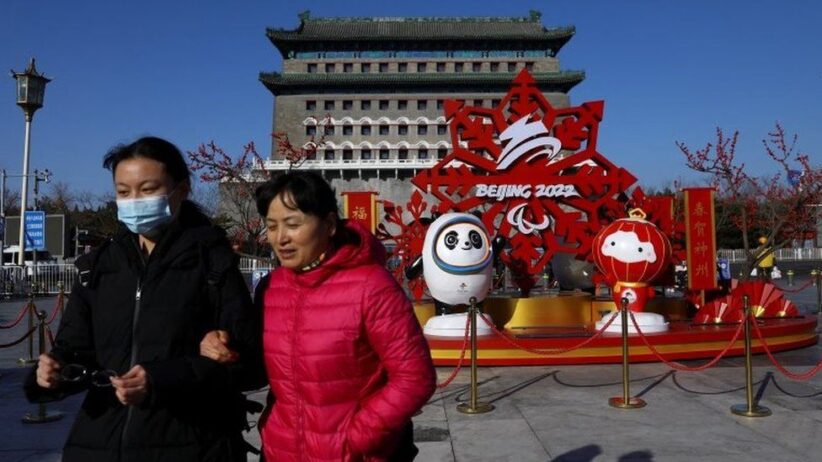 Organisers of the Beijing Winter Olympics have eased a Covid-19 testing requirement for participants, amid a growing number of cases in the capital.

The new change makes it easier for participants arriving at the Games to be considered virus-free.

Of more than 3,000 Olympic arrivals, 106 have tested positive for the virus since 4 January.

Outside of the tournament’s closed-off premises, Beijing locals are facing harsher restrictions and new lockdowns.

Around two million residents in Beijing’s Fengtai district have been told to undergo testing, as a handful of locally transmitted cases were found earlier this week.

Locals who bought over-the-counter treatments for fever or cough symptoms have also been told to do a test within three days of the purchase.

Chinese officials are aiming to stamp out small outbreaks of the virus before the Games begin on 4 February, as Beijing continues its zero-Covid strategy.

But Games officials say they expect more cases to emerge, with Dr Brian McCloskey, the chair of the Beijing 2022 Olympics medical expert panel, telling a media briefing on Sunday that organisers’ aims were “zero spread” not “zero cases”.

He said the challenge lay in organisers detecting and isolating positive people quickly.

But in perhaps a concession to the the reality of the virus’ spread, Games officials on Tuesday introduced a slight relaxation in testing rules.

Participants will now have to meet a cycle threshold (CT) standard of 35, instead of 40, to count as being positive with the virus.

The higher the CT value, the less infectious a person is. China had initially opted for the higher measure of viral load, despite the 30-35 value being widely accepted elsewhere.

In a further relaxation, close contacts will also have their isolation time halved from 14 to seven days.

Those who do test positive for Covid at the Games will be able to take part in the tournament after returning two negative tests.

Dr MrClosky, in his briefing on Sunday, said organisers were trying to find a balance for the Games attendees.

“You can either set the bar very low to make sure nobody is getting through the system who might be infectious – or you can set the bar higher to try and make sure nobody gets excluded from the Games because of a false positive test,” he said according to an SCMP report.

The upcoming Winter Olympics are expected to be the world’s strictest mass sporting event yet, as China is determined to maintain its zero-Covid status.

To do that, it has completely isolated Games participants from the broader public – by containing all athletes, team officials, media and other attendees in vast “closed loop” bubbles for the event’s fortnight.

People arriving for the Games have to clear Covid tests pre-departure, upon arrival and every day while at the Games. So far, just over half of the positive tests have been detected upon arrival at Beijing Airport with the others found during routine testing inside the Olympic bubbles.

Two-thirds with Omicron say they have had Covid before