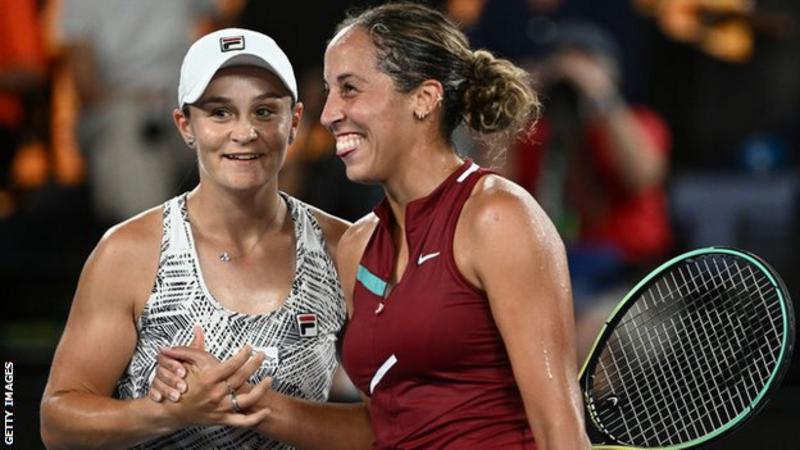 Now she is one win away from becoming the first Australian – man or woman – to win the singles since Christine O’Neil won the title in 1978.

Polish seventh seed Swiatek, who won the 2020 French Open as a 19-year-old, is aiming to reach her second Grand Slam final.

American 27th seed Collins is bidding for her first major final, less than a year after she had surgery for endometriosis.

The world number one reached the semi-finals at Melbourne Park in 2020, with defeats in the quarter-finals coming either side.

This year, Barty has so far looked unstoppable and unburdened by the weight of Australian expectation.

“It’s just unreal – as an Aussie we are spoiled that we are a Grand Slam nation, and now we have a chance to play for a title,” she said.

The 25-year-old Queenslander has been in supreme form in 2022, having now won all 10 of her singles matches this year.

After beating three top-20 players to win the Adelaide International title, she has continued that dominance in Melbourne.

Strong serving has been the bedrock of her success, with her returning game – characterised by a tricky backhand slice – also proving difficult to unpick.

Barty has not dropped a set in her opening six matches, conceding just 21 games on her way to the final.

Key, a former US Open runner-up looking to reach her second major final, was nervous from the start and never looked like troubling Barty.

A deep forehand from the Australian brought a break point in the first game of the match and another cross-court winner, punishing a drop-shot from Keys, enabled her to take it.

Barty backed that up with successive holds to love and then broke again for 4-1, with her returning game proving difficult for Keys to cope with.

A double fault brought up a set point after 26 minutes, which Barty converted with a crisp forehand winner down the line.

Barty saved a break point at 2-2 in the second set when she put away a smash – moments after dumping one into the net – and the Australian promptly broke again for 4-2.

The passionate crowd – including 11-time major champion Laver himself – roared as Barty waited to serve on match point, with the volume increasing further when she put away a forehand to win in one hour two minutes.

“I just tried to run and make as many balls as I could, point by point and just try to do the right things every time,” she said.