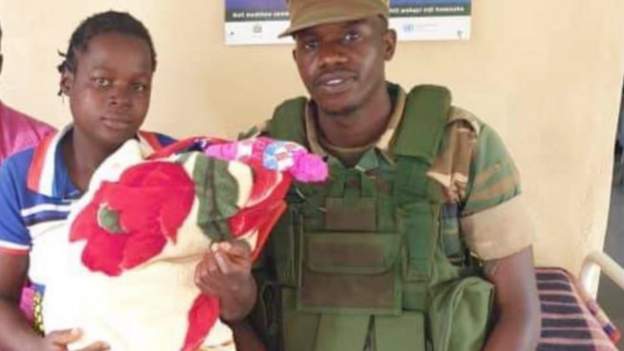 A Zambian soldier has earned himself a promotion for helping a pregnant woman deliver a baby in a maize field.

Humphrey Mangisani has been promoted from a lance corporal to a full corporal for his bravery.

The story of the birth, which – according to Zambian Reports – took place last week in the eastern Petauke district, captured the nation.

Cpl Mangisani said he was called to help the woman who had gone into labour.

He organised for a motorbike taxi to take her to hospital and followed behind in another taxi.

But her labour progressed so quickly that they had to abandon the bikes and he helped her deliver the baby in a field by the side of the road.

“I quickly found a razor blade and helped her to cut the umbilical code. It was raining when she gave birth. I quickly took the baby to the hospital and the mother followed behind,” he said.

The soldier risked a reprimand as he ended up being absent without leave from his camp.

However, the grateful mother gave him the opportunity to name her newborn son – and he chose Raymond as the name for the little baby.

At the promotion ceremony, police boss Brigadier General Kelvin Kanguma said: “You’re not a qualified medical doctor but you went out and helped that lady successfully.”

The police boss said the action changed the public’s perception of soldiers.

“You have shown that a soldier is someone who can help.”

Zambia’s health ministry recently revealed that more than 100 newborns die every week because of delays in getting to hospitals and clinics, which are often far away.