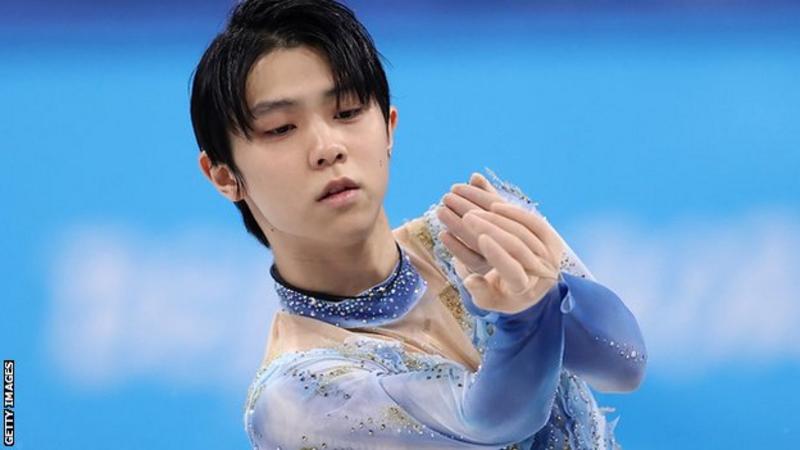 Nathan Chen delivered a world record-scoring routine to lead the men’s figure skating at Beijing 2022 but Yuzuru Hanyu was left “shocked” when his medal chances were badly dented.

The showdown between the Japanese double Olympic champion and the American triple world champion is one of the most keenly anticipated here.

But Hanyu missed his opening jump in the short programme – saying he felt a “hole” in the ice – to sit eighth.

The decisive free skate is on Thursday.

The top 24 skaters after the short programme go through to perform a longer free skate, with the scores from both combined to determine the final standings.

This was a different story to four years ago, when pre-Games favourite Chen failed to land a single jump in his short programme as nerves got the better of the then 18-year-old.

The ‘Quad King’ has since dominated the sport, winning three successive World Championships, but still had a point to prove at the Olympics.

He did it in spectacular fashion with a world record score of 113.97 – surpassing Hanyu’s previous mark of 111.82, set in 2020 – for an elegant routine in which he nailed every jump and spin in style.

Hanyu, who had an ankle injury in the run-up to these Games, said he had failed to attempt his opening quadruple salchow because of a divot in the ice.

“I feel really shocked,” he said.

“I didn’t feel anything bad until take-off. When I took off, I was under some hole, maybe [caused by] some other skater’s toe [loop] or flip or something.

“I used other another place in the six-minute warm-up and I felt really good. I just moved a little in the competition with the music and I was under the hole. That was some accident but it’s OK.”

He will need something special to rescue his medal hopes – and he could deliver that in the shape of a historic first.

Nicknamed the ‘Ice Prince’, he has vowed to attempt to become the first skater to successfully land a quadruple axel – four and a half rotations of the body – in competition.

“I have one more chance. I have lots of time with the music and many jumps in there, so I can be my best.”

Hanyu had skated in an earlier group to Chen and the American said he put his rival’s mistake out of his mind to focus on his own performance.

“But the competition’s not one programme. Whatever happens in the short programme is not indicative of what will happen in the free programme.”