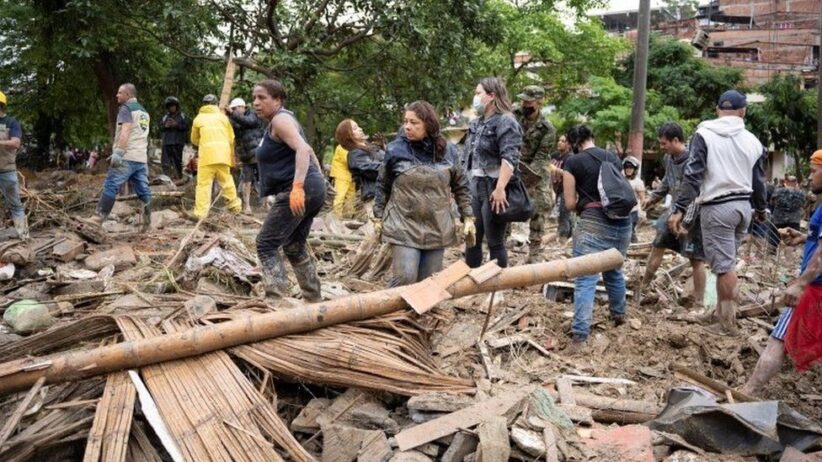 A landslide triggered by heavy rains has killed at least 14 people in central Colombia, officials say.

Another 35 people were now in hospital after several homes were engulfed in the Dosquebradas municipality, Risaralda province, on Tuesday.

The officials issued a photo showing a gash in the lush foliage covering a mountain overlooking the area.

Other residents living close to a swollen river nearby have been moved to safety.

Rescue teams have been searching in the mud for more survivors, Colombia’s disaster management officials said.

“A very loud noise scared us. We went out and saw a piece of the mountain on top of the houses,” taxi driver Dubernei Hernandez told the AFP news agency.

“I went to that place and it was a disaster, with people trapped.”

Mr Hernandez said he helped dig up two bodies and a survivor. At least five homes were buried by the mud, he added.

There are fears that the death toll will rise further.

Landslides are common in Colombia and houses built on steep hillsides are at particular risk during the country’s rainy season.

In 2019, at least 28 people were killed after a landslide hit the south-western Cauca province.

Two years earlier, more than 250 people were killed when a landslide hit the town of Mocoa, in the southern Putumayo province.

US university in $250m payout for doctor’s sex abuse