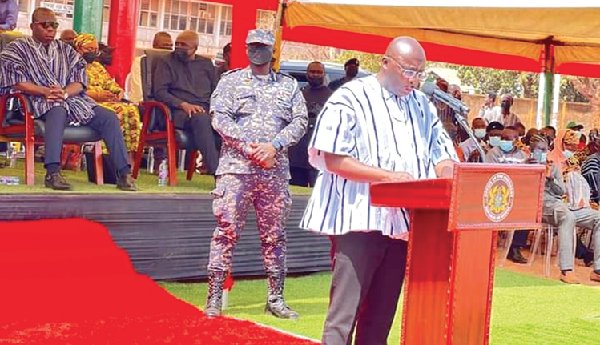 A $54.5 MILLION shea landscape project aimed at boosting the production of the cash crop has been launched in Tamale, the Northern Regional capital.
Dubbed “Shea landscape emission reductions project (GSLERP)”, the seven-year programme also seeks to mitigate the effect of climate change on the fragile ecosystem in the Northern-Savannah ecological zone.

Under the project, 70 community nurseries would be raised and managed by 26 women cooperatives, while more than 1.75million shea and 480,000 other economic trees would be planted on 500,000 hectares of land.

When successful, the project will help reduce 6.139 million tonnes of carbon dioxide equivalent in emissions and also improve on the livelihoods of more than 600,000 women in the Northern, North East, Savannah, Upper West and Upper East regions.

The project is being implemented by the Forestry Commission, in collaboration with the United Nations Development Fund (UNDP), the Global Shea Alliance and the Northern Development Authority (NDA), with support from the Italian government.

The Vice-President, Dr Mahamudu Bawumia, who lunched the project, expressed the hope that it would help restore the country’s depleting vegetation cover and also increase the income levels of rural women.

He said the intervention formed part of the government’s commitment to promote the cultivation of shea in the northern part of the country to transform the local economy just like cocoa was doing in the southern sector.

According to Dr Bawumia, issues of livelihood were at the core of the government’s agenda, for which reason it would continue to invest in the shea industry to turn the fortunes of the people around.

“The project aligns well with the national climate policy which seeks to build a climate-resilient and compatible economy while achieving sustainable development,” he added.

The Vice-President said the world was currently battling with climate change which had resulted in the extinction of nearly one million animal and plant species, and exposed humans to extreme temperature conditions, hence the need to adopt nature-based solutions.

Dr Bawumia further said the government had since assumption of office supported scientific research of the shea plant to make it a reliable income-generating product, “leading to an important breakthrough, most impressively the gestation period for the shea plant which has significantly reduced from over 20 years to an average of three years”.

He commended the various partners for supporting the government’s effort to develop the shea industry and mitigate the impact of climate change.

The Minister of Lands and Natural Resources, Mr Samuel Abu Jinapor, explained that the GSLERP was a component of the Ghana REDD+ strategy that had been developed to address the alarming climate change situation in the country.

He said the outcome of the project was expected to catalyse transformative change across the Savannah landscape and attract significant private sector investment in the shea value chain and restoration.

“It is aimed at reducing emissions from deforestation through fire and wood fuel resource management, sustainable management of the forests and enhance carbon stocks through shea restoration,” the minister added.

The Chief Executive Officer of the Forestry Commission, Mr John Allotey, said his outfit had developed the necessary framework, including key stakeholder consultations, to ensure the successful implementation of the project

For his part, the Northern Regional Minister, Alhaji Shani Alhassan Shaibu, also expressed commitment to ensure the project was carried out to specification.

2 Judicial Service cashiers on the run for alleged theft