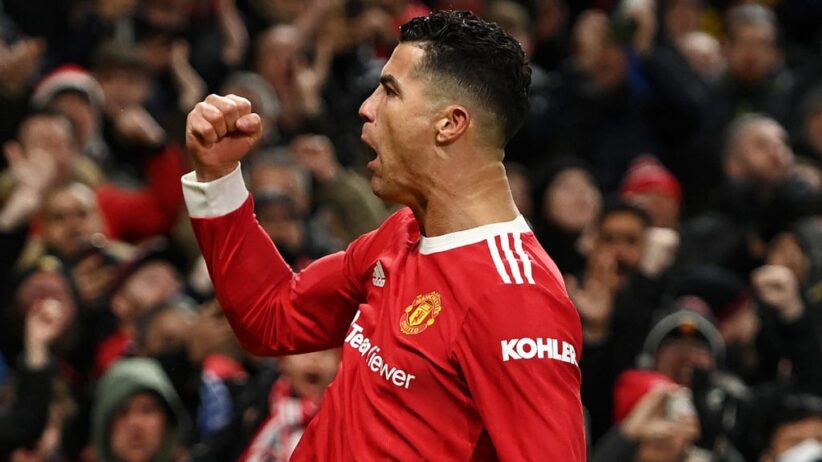 Ralf Rangnick had called for Manchester United to show their “beautiful face” against Brighton, but after an ugly first-half performance, it was left to Cristiano Ronaldo to give the Red Devils a much-needed glow up.

The Portugal international came into the game on his longest goal drought since 2009 after six goalless games in which his overall performances had also been criticised.

But on Tuesday, it was his brilliant finish from the edge of the area shortly after half-time which ignited the team and set them on their way to a crucial 2-0 win.

There was no trademark ‘Siu’ celebration this time, though. Instead he performed knee slide into the corner, screaming towards the fans in a clear moment of relief, as well as frustration at the criticism he has received.

The 37-year-old could even be seen still fist pumping to himself when the whistle was being blown for kick-off following the goal.

For United, it was a much-needed strike after an abysmal first half.

They were dominated so much by Brighton that after 25 minutes, Rangnick ditched his 4-3-3 to a familiar 4-2-3-1 in the hope of gaining some control in the middle of the pitch.

Their passing was woeful, they did not attack with any structure or cohesion, and defensively they looked weak every time Graham Potter’s side pushed forward.

The Brighton boss was taking charge of his 100th Premier League game, and it was blatantly obvious which side were used to reacting to their manager’s demands and which were not.

If it was not for a brilliant save from David de Gea to deny Jakub Moder, United would have been trailing at the break.

Rangnick had described United’s recent performances as being ‘Jeykll and Hyde’ in his pre-match comments, with moments of brilliance counteracted by silly mistakes, loss of structure and a drop of intensity; normally in the second half.

This performance, though, bucked the trend of the previous three, all of which ended in 1-1 draws against inferior opponents.

Instead of a poor second half, United had a forgettable first before responding in the second, with Ronaldo’s tricking of three Brighton defenders with a dummy before firing a shot past Robert Sanchez the catalyst.

“An amazing goal, not only an important one but an amazing goal and I think overall it was a good performance by Cristiano,” said Rangnick post-match.

“Energetically, he was always trying to help team-mates, and I think in the last weeks, definitely the best performance by him, and a very, very important goal for us.”

Ronaldo’s first goal of 2022 means he has now scored in every calendar year for the past 20 years, and he could have had more here.

A leaping header from a corner had to be pushed onto the post by Sanchez, and with 70 minutes on the clock he should have added an assist to his goal after putting it on a plate for Bruno Fernandes, only for his compatriot to be denied by the Brighton goalkeeper.

‘Viva Ronaldo’ rang out from the stands after the five-time Ballon d’Or winner spurned another glorious opportunity to double United’s lead with a free header soon after, as his effort went wide of the post

This was not the vintage Ronaldo of old, but it was a marked improvement of his performances of late and he showed, if there was any doubt, that he still has something spectacular in his locker.

The goal, followed shortly after by Lewis Dunk’s red card for a foul on Anthony Elanga, was what turned the tide on what looked set to be another shocking night for Rangnick’s side, but from there they dominated possession and controlled the game.

Fernandes eventually sealed the three points with after some quick thinking from Paul Pogba set him away on a stoppage-time counterattack, with the victory pushing United back into the Premier League’s top four.

It was far from the “beautiful” 90 minute display Rangnick was hoping for, but it was inspired by one moment of beauty at least.

Ronaldo’s drought is over, and United will hope so too is their run of underwhelming performances.