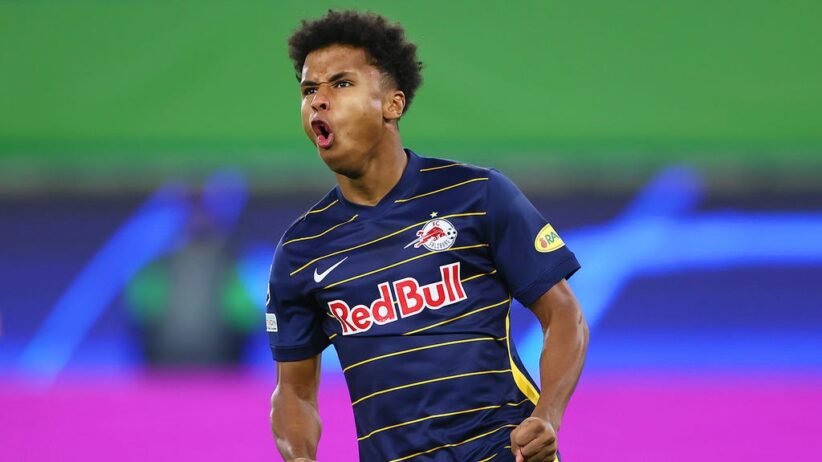 When Bayern Munich face Red Bull Salzburg in the Champions League on Wednesday, only two of the 22 players on the pitch will be Bayern academy graduates.

Thomas Muller is a Bayern legend already, with 10 Bundesliga titles, two Champions Leagues and over 600 games for the club where he grew up.

The other ex-Bayern academy player in the starting XIs will be Karim Adeyemi.

The striker was also on the books in Munich but was cut as a nine-year-old back in 2012 and now finds himself lining up against the Bavarian giants.

Bayern are often criticised for not producing enough top-class players through their academy, with then-club president Uli Hoeness even mentioning these failings when their new campus opened in 2017.

“In the last few years, the results of our work haven’t been good. No player has even come close to making the first team since David Alaba,” Hoeness said.

“The new FC Bayern Campus will also provide one answer to the current transfer madness and the explosion of salaries.”

Adeyemi looks like the perfect example of someone who would make the Bayern first team and negate the need for them to spend big on a long-term successor to Robert Lewandowski.

However, he is very much the one that got away.

After Bayern released him for punctuality reasons, he stayed in Munich, joining Unterhaching, a former Bundesliga side now languishing in the lower divisions.

He impressed in Unterhaching’s youth teams and despite Chelsea’s scouts watching him closely and a trial with Liverpool, Adeyemi decided to join Salzburg for a fee of €3.4 million (£2.9m/$3.7m).

The staff at Unterhaching had helped him focus on his school work and improve his behaviour, particularly club president Manfred Schwabl, whom he views as a mentor.

“Karim was a little rascal in his childhood. We had to straighten him out a bit when it came to school. That he got there on time, had everything with him,” Schwabl told GOAL.

“When he was 16, some clubs from England wanted to sign him. For example, some scouts from Chelsea came, but I don’t know if that would have worked out.

“The move to Salzburg was exactly right because it’s not too far away from his home in Munich. The closeness to his family is very important. He has a very good and stable environment.”

Schwabl helped Adeyemi improve his grades at school by banning him from training and playing for the club. The teenager would still ride his bike from home to the training pitch, but Schwabl held firm and Adeyemi’s effort at school quickly improved.

There was no question mark over his application on a football field and, as an 11-year-old, he scored against Bayern’s Under-11 side to knock them out of the 2013 Merkur Cup.

At 15, he was playing for Unterhaching’s U17s and, in a Champions Game with Heidenheim, with his side down to 10 men and the scores level at half-time, Adeyemi took it upon himself to be the hero.

“When we were in the dressing room,” coach Ognen Zaric told GOAL and Spox, “Karim suddenly spoke up and said, ‘Coach, stay calm, I’ll fix it.’

“In the end, we won the game 2-0 and Karim scored both goals after great solo runs.”

Salzburg was the perfect next step for Adeyemi, initially honing his trade in Austria with sister club FC Liefering in the second division.

Now, he is the latest free-scoring forward in Salzburg, following the well-trodden path of Erling Haaland and Patson Daka, with 14 goals in 18 Austrian Bundesliga games.

Even more impressive is his Champions League return, with three goals and two assists in six games to send Salzburg into the last 16 for the first time in their history.

Fate obviously paired him with Bayern Munich, who turned down the chance to sign him back before he moved to Salzburg.

“Manni Schwabl also contacted Uli Hoeness at the time and we weren’t willing to pay that much for him,” former Bayern CEO Karl-Heinz Rummenigge admitted in 2021.

“He has developed well now. I have watched him play for Germany and now in the Champions League. He is an interesting player.

“We’ll have to wait and see what’s happening. Now he might cost an extra zero at the end.”

Adeyemi greatly matured at Unterhaching and holds no ill will towards Bayern, preferring to focus on his present and his future as he continues to develop with Salzburg.

“At Bayern it quickly became clear that there was a precise plan. If you, as a player, stepped out of line or did not stick to this plan, you usually received little support,” Adeyemi told GOAL.

“It remains to be seen whether they felt I had a lack of discipline. I don’t think that was the decisive factor. It just didn’t fit with Bayern anymore. We didn’t get along so well anymore.

“The relationship between my parents and the sports director at the time was no longer as it should be. But that’s yesterday’s news.”

Today’s news is that Adeyemi could have the greatest revenge on his former club in the Champions League and then go one step further by joining their Bundesliga rivals.

Unsurprisingly, Bayern have met with Adeyemi, while Liverpool have been linked, but the three-time Germany international looks set for a summer move to Borussia Dortmund.

He has already agreed personal terms with BVB, but the clubs still need to agree a transfer fee.

‘Special’ Elliott can replace Salah as one face of Liverpool’s next generation, says Carragher