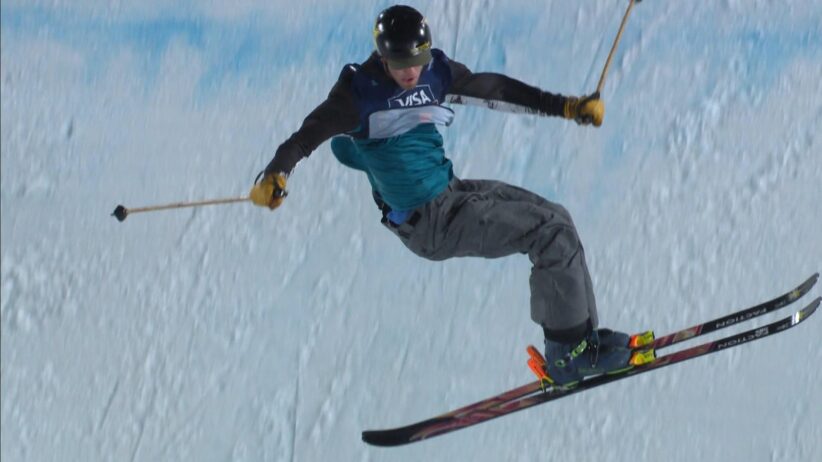 Alexander Hall won freestyle skiing gold in the Winter Olympics men’s slopestyle as the USA claimed a one-two on the podium in Beijing.

An opening run score of 90.01 was enough to earn the 23-year-old victory ahead of compatriot Nicholas Goepper.

Goepper posted 86.48 on his second run to take silver, as Sweden’s Jesper Tjader finished in bronze with 85.35.

Britain’s James Woods, fourth at the 2018 Games, pulled out of qualification on Tuesday with a back injury.

Hall, who failed to qualify for the final at his first Games in 2018, completed his gold medal-winning first run with an innovative double 1080 pretzel.

“It definitely was the best slopestyle run I’ve ever done, mainly because it embodied everything I love about skiing and how I approach skiing,” said Hall.

“I’m really glad that the creativity was able to shine through and that got rewarded,” he added. “I figured I would just give it my all and go all-in right away.”

With the match tied at 2-2 following a goalless overtime period, there were seven missed penalties before Slovakia’s Peter Cehlarik beat goalkeeper Strauss Mann – and Andy Miele could not keep the USA’s hopes alive with their final chance.

The ROC defeated Denmark 3-1 as they they aim to become the most successful nation in men’s ice hockey with a 10th title.

Canada – the joint most successful nation – take on Sweden, and Finland face Switzerland in the other quarter-final matches later on Wednesday.

Sweden’s women improved on their 2018 biathlon relay silver medal as they claimed gold in Zhangjiakou.

The quartet of Linn Persson, Mona Brorsson, 2018 individual champion Hanna Oberg and, on the anchor leg, her younger sister Elvira, won in a time of one hour 11 minutes 03.9 seconds.

That saw them cross the line 12 seconds clear of the ROC, while Germany finished in bronze position at 37.4 seconds back.

It is a third medal and first gold for 22-year-old Swede Elvira on her Olympic debut, following silvers in both the sprint and pursuit events.

Reigning champions Belarus were unable to mount a defence of their title, finishing in 13th.

There was also a silver for defending champions Sweden in the freestyle skiing’s women’s team sprint classic, as Germany took the gold.

‘Can a cockroach be justified in a court of fowls?’ – Sosu replies Magistrates and Judges Association