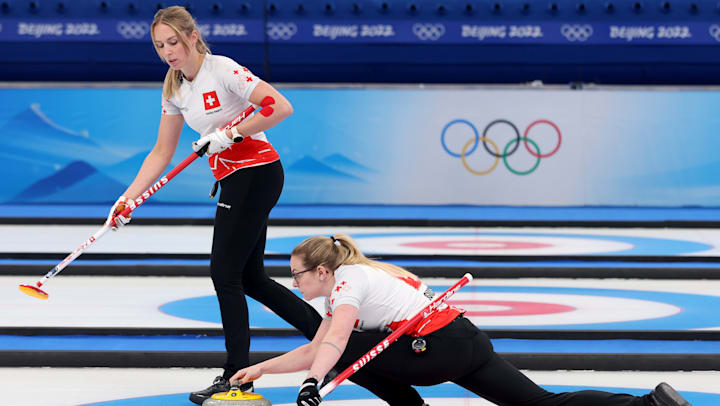 Great Britain’s hopes of earning two curling medals are still alive as the women squeezed into the semi-finals after the men set up a last-four meeting with the United States.

Bruce Mouat’s men’s side defeated Canada to top the standings.

A win for the Scottish quartet would guarantee at least a silver medal as Britain search for their first of the Olympics, and then Muirhead’s side will get the chance to do the same on Friday at 12:05 when they meet Sweden.

It was the Swedish defending champions who ultimately ensured Britain would progress as they beat South Korea long after the other three matches had finished, to eliminate their opponents.

Muirhead’s team had already held up their end of the bargain by that stage, as the British skip delivered a fantastic final stone in the ninth end to score four and clinch a 9-4 win against the ROC.

“We had to win that game today and that’s what we went out there to do,” Muirhead told BBC Sport.

“We fought out hearts out, nothing was in our control apart from our own game and that’s what we did.

“I was in this position in 2018 as well in the semi-final and I do want to do one better. I’m very proud of this team, we’ve played very well all week.

“As much as we’ve lost a few games all of us know those losses have not been through a lot of bad play, it’s been inches here and there – but that’s curling.”

Switzerland will face Japan in the other women’s semi-final, with Canada the only team with a record of five wins and four losses to miss out.

The men had already sealed their play-off spot with two games to spare, but were keen to maintain their momentum after six straight wins, while top spot also means they will take hammer advantage in the semi-final and in a potential final.

Their opponents Canada – led by 2006 gold medallist Brad Gushue – have high hopes of winning the competition but were left frustrated by a disciplined British display.

Gushue was left with a tough final shot to promote one of his stones in the sixth end, and his miss gave Britain a steal of one for a 4-2 lead and once again they proved too good to catch.

The Canadian skip was short with his final draw in the eighth to give Mouat’s team another one for a three-score lead, which Canada conceded as too big to overcome midway through the ninth end.

Meanwhile, the USA beat Denmark 7-5 to ensure they snuck into the last play-off berth.

John Shuster’s rink are the only side to have beaten Britain so far, as they look to repeat their feat of 2018, when they scraped into the last four before claiming a shock gold medal.

“It was a while ago so it’s hard to remember the game [the 9-7 loss to USA] but that wasn’t our best performance,” Mouat added.

“We’ve been playing really well after that and we came right back and bounced back against the Norwegians and played one of our best games.”

Canada will meet Sweden in the other semi-final.