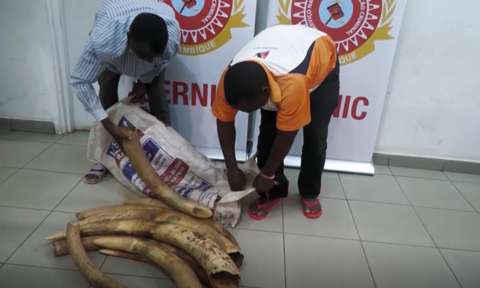 Mozambican authorities have seized 11 elephant ivory tusks in a residence in the western city of Tete.

Two people have been detained in connection with the case.

The detained suspects have denied involvement in the crime saying they only brokered the sale.

The country’s National Criminal Investigation Service spokeswoman, Celina Roque, said police officers pretended to be buyers so as to arrest the suspects.

Last month, the police seized 50 elephant tusks from a house on the outskirts of the capital Maputo.

Such cases are common in Mozambique and many do not come to the attention of the authorities – even as poaching remains a threat to wildlife.

Unlicensed slaughter of any protected or prohibited species is punishable by penalties ranging from 12 to 16 years in prison.

Nigeria seizes tonnes of hides on sale as food