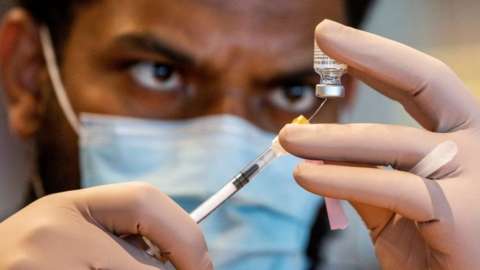 South Africa’s health ministry says people over the age of 18 will now be allowed to “mix” their vaccines.

It means, for example, that those who took the Johnson & Johnson vaccine will be eligible to receive a booster dose of Pfizer.

The new regulations mean there is now a shorter waiting period between the first and second dose.

From Wednesday, the interval between the first and the second doses of the Pfizer jab will be reduced from six weeks to three weeks.

There will now also be a shorter waiting period of two months for a booster dose for those who’ve taken the Johnson & Johnson shot.

Until recently scientists around the world have been divided on the merits and safety of mixing vaccines.

It’s been done in parts of Europe and in the US.

About 31 million doses have been administered in South Africa so far, and officials hope these latest measures will boost uptake.