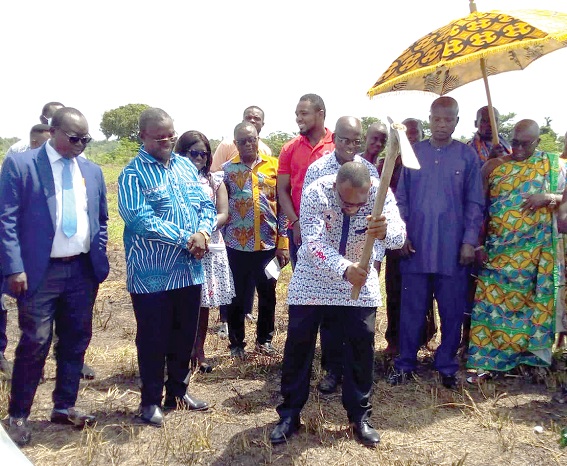 The project, which is to be constructed on four plots of land, consists of offices for sister associations, the Divisional GMA Secretariat, single-bedroom flats and recreational grounds.

Already, the association has earmarked GH¢100,000 for the start of the project and expects to release the same amount each year until the completion of the project.

The sod-cutting ceremony was done on the theme: “Increasing doctor population in the Bono, Bono East and Ahafo regions for holistic healthcare.”

When completed, the secretariat is expected to provide a common meeting point, boost interaction and knowledge sharing among doctors, institutions, agencies and other stakeholders in the regions.

Speaking before the sod cutting, the Divisional Chairman of the GMA, Dr Alexander Kofi Egote, said the theme was in line with the government’s agenda for Universal Health Coverage (UHC).

He said the idea of universal health coverage could not be achieved without adequate doctors in the division, saying, “We can have an ultramodern health facility with all health workers, but without the doctor, the facility becomes deficient in holistic healthcare delivery.”

Dr Egote said when completed, the project would ensure the comfort of doctors towards improving their productivity in quality health service delivery and facilitate fruitful interactions among doctors.

For his part, the President of the GMA, Dr Frank Serebour, said the GMA housing and secretariat project would play a key role in the attraction and retention of doctors in their posted areas.

He said the project was the first of its kind in the country, explaining that it was his vision for every division to get such a facility to improve the social lives of doctors.

Dr Serebour said the association had started educating doctors, particularly junior doctors, on the reasons to accept and retain postings to deprived areas.

He advised the public, especially district assemblies, to create enabling environments to attract and retain doctors posted in their communities.

He said the association had put in place measures to equip hospitals with some tools and equipment such as post therapy, incubators and theatre beds.

The Bono Regional Director of Health, Dr Kofi Amo-Kodieh, said inadequate critical staff in the region was a major challenge in a situation where one doctor was stationed in a health facility.

“In this urgent era, we are still running one man stations in Bono. I know the Bono East and Ahafo regions are having the same challenges,” he stated.

In a speech read for him, the Bono East Regional Minister, Mr Kwasi Adu-Gyan, said the government would continue to assist the GMA with the needed tools, infrastructure and professional development to enable them perform their duties which were essential to the economic and social wellbeing of the country.

The Bono Regional Minister Ms Justina Owusu-Banahene, in a speech read on her behalf, also promised to follow keenly the progress of the project to see to its successful completion and appealed to the GMA to ensure that the project was not delayed unduly.