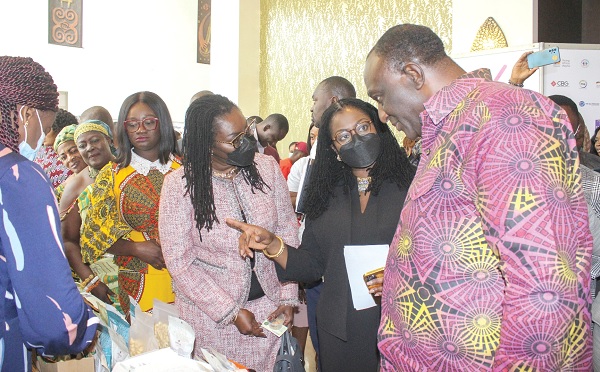 He said those biases went to create an unfavourable business environment for women entrepreneurs, among other adverse effects, such that even when women exhibited good business skills, they were viewed as being aggressive and unnerving.

“It is important to rise against gender stereotypes, and we, as a government, are committed to doing that,” the President said.

This was contained in a speech read on the President’s behalf by the Minister of Communications and Digitalisation, Ursula Owusu-Ekuful, at the third biennial Ghana Women Entrepreneurship Summit (GWES) and the launch of the Women Entrepreneurs Rise (WERise) Network in Accra on April 25, 2022.

It was organised by the Ghana Enterprises Agency (GEA) on the theme: “Breaking barriers, accelerating women-owned businesses”.

The two-day summit is being addressed by panellists such as the National Project Coordinator in charge of Young Africa Works at the GEA, Suzan Yemidi; the Chief Executive Officer (CEO), She Hub, Erica Kyere; the CEO of Makeup Ghana, Rebecca Donkor, and the Deputy CEO of the GEA, Anna Armo-Himbson.

Among issues being discussed are challenges women entrepreneurs encounter in their contribution to the development of the country’s economy.

The WERise Network is a support network established under the GWES to unite the efforts of women in the micro, small and medium enterprises (MSME) sector to tackle shared challenges and also provide a suitable environment for constructive peer interactions and knowledge sharing.

President Akufo-Addo said the government would implement the UN Sustainable Development Goal (SDG) Five in its entirety to ensure gender equality and empowerment in the country.

He said there would be deliberate policies to empower women, particularly those in the entrepreneurial space, adding: “Women entrepreneurs have been the cornerstone of our great nation’s development and are strategic partners in our quest to deliver socio-economic development to the people.”

“Collectively, it is acknowledged today, more than ever before, that the empowerment of women-owned businesses has ceased to be an academic debate,” he said.

The Minister of Trade and Industry, Mr Alan Kyerematen, said harnessing the benefits of entrepreneurship would, no doubt, help accelerate Ghana’s economic recovery post-COVID-19 and make it more inclusive of the contribution of women and the youth.

According to him, business networks had become more important in contemporary times, when peer learning, information sharing and mentorship could help women build resilience in their businesses.

The minister said women entrepreneurs working together would not only improve the quality and scale of businesses but also enable them to monitor market trends, tackle regulatory obstacles and anticipate changes.

He said being part of a networking platform dedicated to addressing the specific needs of women would enable members to harness the power of their collective voice to convincingly, forcefully and more systematically advocate the removal of all barriers to entrepreneurship.

He, therefore, described the establishment of the WERise Network as a step in the right direction.

For her part, the CEO of the GEA, Kosi Yankey-Ayeh, said the percentage of women who were economically active in the country was almost equal to that of men, but that women tended to be concentrated in less lucrative, informal and insecure occupations.

“For women, especially in developing countries, entrepreneurship is one of the key vehicles for empowerment. The World Bank estimates that in 155 out of 173 economies, at least one gender-based legal restriction exists in women’s employment and entrepreneurship,” she said.