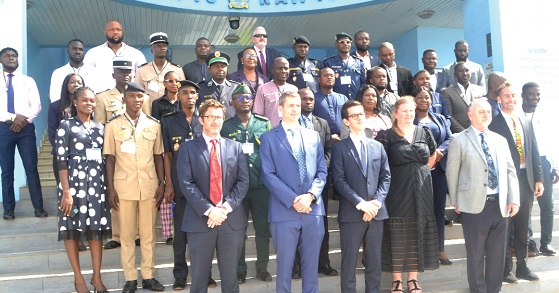 The three-week workshop, which is being held at the Kofi Annan International Peacekeeping Training Centre (KAIPTC), will end on May 12, 2022.

It is aimed at enhancing the capacities and capabilities of the participants in kidnap management and hostage negotiations based on guidelines contained in the 2021 version of the UN Office of Counter-Terrorism (UNOCT) manual on countering kidnapping and extortion.

Other topics to be discussed are hostage negotiations, good practices and proven international standards and communication skills.

Participants will also share experiences of the peculiar situations in their respective countries.

It is being organised by the UNOCT, with facilitators drawn from the National Crime Agency of the United Kingdom and the Swiss Federal Police of Switzerland.

According to the Global Terrorism Database, before 2010, kidnapping incidents were about 6.9 per cent, representing a small portion of all terrorist attacks.

However, the percentage of kidnappings jumped significantly to 15.8 per cent of all terrorist attacks as of 2018.

Globally, bombings and explosions accounted for 47 per cent of all attacks in 2017; armed assault, 22 per cent; infrastructure attacks, 12 per cent; hostage taking, 10 per cent, and assassinations, eight per cent.

In a speech delivered on his behalf by an Attaché of the Embassy of Switzerland in Ghana, Benin and Togo, Tim Segessemann, the Ambassador of Switzerland to Ghana, Philipp Stalder, said tension was on the rise across the sub-region following the rise in political fragility and armed conflicts.

Such a development, he observed, came with the risk of kidnapping, saying countering the threats demanded common coordinated efforts and the active participation of states, which needed to work together to ensure the safe resolution of hostage situations — the safety of hostages, the authorities involved and the public at large.

“Communication is key to implementing the UNOCT manual. Switzerland’s contribution to the UN counter-kidnap manual, in essence, concerns communication with victims and offenders during and in the wake of hostage situations,” the ambassador added.

The manual, Mr Stalder further explained, ascribed paramount importance not only to the needs of victims during negotiations but also underscored the value of addressing the needs of local agencies on the ground.

The First Secretary and Cyber Attaché, Foreign, Commonwealth and Development Office of the UK, Felix Wood, said the training was critical to the enhancement of security in the region.

Mr Wood, who is also the Head of the Upstream Threat Campaign in Ghana, added that the UK was committed to security in beneficiary countries, for which it had partnered organisers of the event to achieve the desired results.