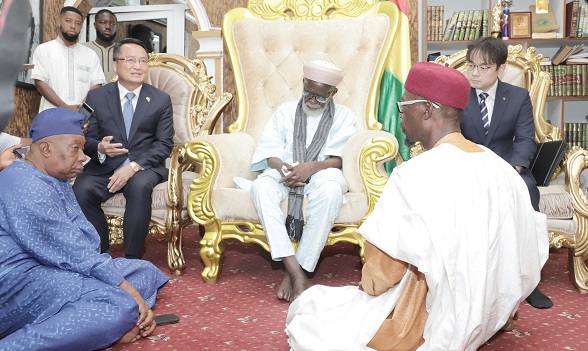 During a courtesy call on the National Chief Imam, Sheikh Osman Nuhu Sharubutu, the Ambassador said although he had been an Envoy for less than two years, he had identified numerous similarities between the peoples of Ghana and Korea which needed to be harnessed and strengthened.

“Korean people are peace-loving and family-oriented, while Korea is a democratic-market oriented country, and those traits are also very strong in Ghana,” he said.

The visit to the Chief Imam was to deepen bilateral relations between Korea and the Muslim community in Ghana.

The Envoy explained that while he was determined to develop relations between Ghana and South Korea a step further during his tenure, he was also keen to establish stronger ties between his country and the Muslim community in Ghana.

Mr Lim, accompanied by some senior officials of the South Korean Embassy, made a presentation to the Office of the National Chief Imam, which included an undisclosed amount of money.

Mr Lim said his country was desirous of seeing the development of Ghana, as reflected in the lives of ordinary Ghanaians, “for them to be able to stand on their own feet”.

He said just as South Korea had been able to succeed, it was the desire for Ghana to learn from Korea’s experience to help in its development process.

“Every year, we invite government officials and students to Korea to give them the opportunity to learn from Korea’s development, history, high technology, among other things,” the Ambassador added.

Welcoming the South Korean delegation, Sheikh Sharubutu expressed his gratitude for the Ambassador’s gesture to foster a relationship with the Muslim community, adding that he was impressed by the embassy’s commitment in the area of education and energy.

He was hopeful that fostering stronger ties on the basis of shared values would make the countries more united and more prosperous.

Speaking through his spokesperson, Sheikh Aremiyaw Shaibu, the Chief Imam reassured the Ambassador and his delegation of his unflinching support.

“You can call if you want the Chief Imam’s help in any way; we will be prepared to assist you. Similarly, I want you to be of help in any way, I will reach out to you because of the mutual relationship that has been established,” he said.

The Chief Imam prayed for the Ambassador and his delegation, emphasising: “It is our wish and prayer to God that He energises and gives you the opportunity to do more for the mutual benefit of our countries.”

The Executive Director of A Better Community for All, a non-governmental organisation, Yasin Billy, who was part of the meeting, described the visit by the South Korea Ambassador as one in the right direction, as it was intended to foster a harmonious relationship between the Office of the Chief Imam and the Korean Embassy.

He emphasised that the Chief Imam was a philanthropist, peace lover and tolerant leader who embraced the opinions of others and urged the two offices to strengthen the bond of friendship now established for the benefit of their countries.