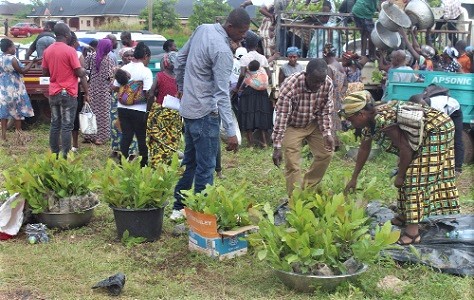 The distribution of the cashew seedlings is in connection with the government’s flagship programme, Planting for Export and Rural Development (PERD), which is one of the five modules of the Planting for Food and Jobs (PFJ) initiative.

The assembly’s department of the Ministry of Food and Agriculture (MoFA) established five different nursery sites in the municipality to bring the seedlings to the doorstep of the farmers.

The nursery sites are located at Ayakomaso, Fiapre and two different sites at Odumase, the district capital.

The assembly is expected to use five days to distribute all the 160,000 seedlings to the registered farmers.

Since the introduction of the PERD programme, the assembly has supported more than 3,000 farmers with improved cashew seedlings in the area.

The assembly has decided to invest in cashew production to make the municipality a hub of the commodity in the region, in the next five years.

Speaking during the launch of the improved cashew seedlings, the Sunyani West Municipal Chief Executive (MCE), Evans Kusi Boadum, said the PERD programme was a game changer because of its focus on the development of tree crops.

He said key among benefits to be accrued from the programme was its potential to address the critical issue of the foreign exchange earning capacity of the country.

Mr Boadum said when President Nana Addo Dankwa Akufo-Addo talked about Ghana Beyond Aid, it meant all those little things put together would go a long way to enhance the income levels of citizens, in addition to increasing their purchasing power.

He said the programme also sought to create a sustainable raw material base for farmers across the country, to increase the country’s revenue in the exportation of agricultural products.

Mr Boadum said the PERD programme was a decentralised National Tree Crop Programme that was geared towards promoting rural economic growth and improving household incomes of rural farmers through the provision of certified improved seedlings, extension services and business support in order to increase exports.

He said the initiative was also in response to the government’s decentralised industrialisation agenda, One-District One-Factory, which was intended to support more than a million farmers to cultivate an average of one hectare of land each with certified seeds offered to them.

“In response to this the assembly in its 2022 planting season nursed 160,000 cashew seedlings to freely distribute to 1,450 registered farmers,” Mr Boadum said.

He appealed to the public, including public servants, to take advantage of the programme to enhance their family incomes and commended the organising committee and agriculture workers for working hard to nurse that quantity of seedlings.

He said since the inception of the programme in the municipality, many farmers had been supported with cashew seedlings, explaining that evidence available suggested that the beneficiaries were doing very well.

Mr Buabeng, therefore, appealed to the beneficiary farmers to take good care of seedlings in order to reap the maximum benefits from their ventures in future.

A 38-year-old farmer, Bismark Adjei Duah, told the Daily Graphic that the presentation of the seedlings had come at the right time since most of them had finished preparing their lands for planting.

He said supply of the seedlings would go a long way to support them to increase their production, explaining that it was difficult for individual farmers to nurse the seedlings or get improved seedlings.

“The assembly’s intervention has made our work very easy. I have planned to invest heavily in cashew production this year. I have five acres of land ready for planting,” Mr Duah stated.

He thanked the assembly and its Department of Agriculture for the timely intervention and advised his colleague farmers to adhere to best agricultural practices to improve yields.