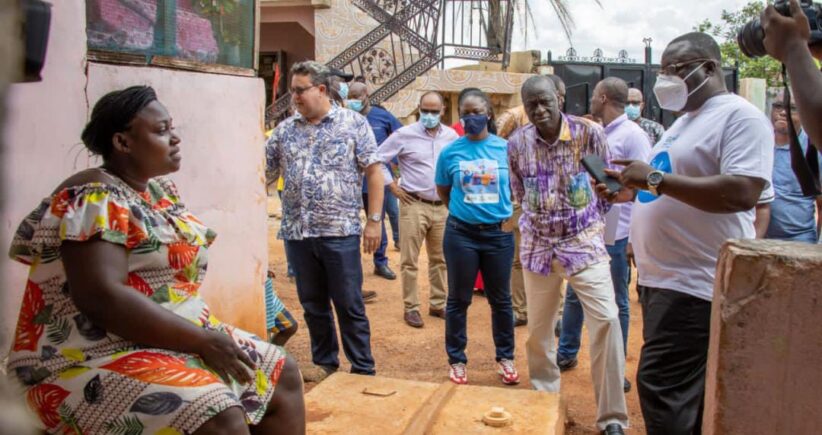 He said poverty could be seen or felt in many ways including lack of access to some services that contribute to the dignity of human being.

So through this project, you are providing your population with access to sanitation facilities, which is a very good initiative and “I am very impressed with what has been achieved,” he said.

Mr Diagana said this during a field visit to Adiebeba in Kumasi, one of the communities benefiting from the Greater Kumasi Metropolitan Area, Water and Sanitation Project (GKMA SWP) being implemented by the Ministry of Water Resources and Sanitation.

The GKMA SWP is being funded by the World Bank with US$125 million.

Mr Diagana was in Kumasi to visit some of the project sites and to interact with the beneficiaries.

He said the project was providing the much needed assistance to the people, “especially regarding access to water and sanitation.”

Contrary to the generally held perception that there was no poverty in big cities such as Accra and Kumasi, he said “in urban areas also there is poverty and this poverty can be felt in many ways including lack of access to some services.”

“This is extremely important and the bank has invested more than $275 million into the project and giving its impact and the necessity for the population to have access to this type of services, we will certainly continue to provide support as needed,” he said.

Following the successful implementation of the Greater Accra Metropolitan Area Sanitation and Water Project (GAMA SWP) from August 2014 to December 2020, the World Bank approved additional facility to the government of Ghana to extend the project to the Greater Kumasi Metropolitan Area (GKMA).

GKMA SWP which started in April 2021, seeks to provide 30,000 households and 120 institutions with access to improved sanitation facilities including provision of water supply.

It is being implemented in eight districts that have been identified as flagship areas. These districts are Ejisu, Kumasi, Asokwa, Kwadaso, Oforikrom, Asokore-Mampong, Suame and Old Tafo.

The Project Coordinator for GKMA SWP, George Asiedu, said after eight months of implementation, the project has built 2417 improved household toilets for more than 19,500 low-income beneficiaries.

Out of this number, he said 55 per cent were females while 45 per cent of the beneficiaries were males.

Maame Yeboah, one of the beneficiaries that the team interacted with, was full of praise to the GKMA SWP for providing her household with a decent toilet at an affordable cost.

She said now the family could use the toilet at anytime without any hindrance, something that was not the case some months back.

Hitherto, she said the family was using the public toilet in the area which was not accessible throughout the day as the caretaker locked the place when she was not available at night and as such people resorted to unorthodox means.

Now, she said, her family, did not have to think about the cost of using the public toilet and the time when nature called.

GIFEC to set up 200 ICT labs this year – GIFEC Administrator