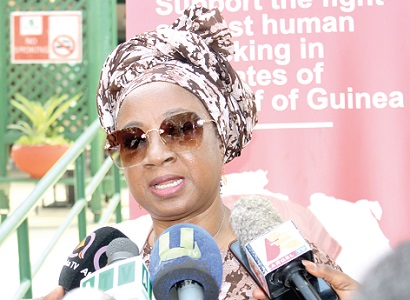 The 13 convictions formed part of the 32 cases prosecuted involving 37 individuals — nine for child labour and 10 for other related offences.

The Chief Director of the MoGCSP, Dr Afisah Zakariah, who made this known at an advance training and capacity-building workshop for law enforcement officers on combating human trafficking and irregular migration, added that 831 victims were rescued from human trafficking last year.

She said while 14 individuals were charged and convicted for child labour exploitation within the reporting period, 13 were charged with human trafficking offences and jailed for between five and seven years in prison.

Dr Zakariah, who was speaking on behalf of the caretaker Minister of the MoGCSP, Cecilia Dapaah, commended law enforcement officers for the great work they had done.

Organised through the support of Expertise France, with funding from the European Union, the four-day workshop has the objective and purpose of equipping law enforcement officers who have already benefitted from basic training to better handle complex cases and have a deeper understanding of issues of trafficking and all its forms in order to prevent the menace.

The participants are from the Ghana Police Service, the Ghana Immigration Service (GIS), the Economic and Organised Crime Office (EOCO), the Customs Division of the Ghana Revenue Authority and the MoGCSP.

Dr Zakariah said in spite of the great efforts by the government to combat human trafficking, the country still had a sizeable number of trafficking cases to grapple with, pointing out that the ministry might never know the actual figures due to the dark side of the trafficking business.

The Deputy Commissioner, Operations, of the GIS, Isaac Luortey, said most of the people trafficked into the country were from the Sahel region and were normally between 15 and 30 years.

He said they were normally brought in their numbers during the dry season to engage in any form of menial work, and that after that season while some among them returned to their countries, others remained here.

Mr Luortey, who was speaking on behalf of the Comptroller-General of the GIS, Kwame Asuah Takyi, said human trafficking, being the second largest criminal industry worldwide, affected the most vulnerable in society, undermined the rule of law, fostered gender inequality and threatened global security.

For her part, the Director-General of EOCO, Commissioner of Police (COP) Maame Yaa Tiwaa Addo-Danquah, disclosed that her office was seriously investigating, among human trafficking cases, some medical doctors, nurses, Department of Social Welfare workers and others who were involved in alleged child stealing and child trafficking.