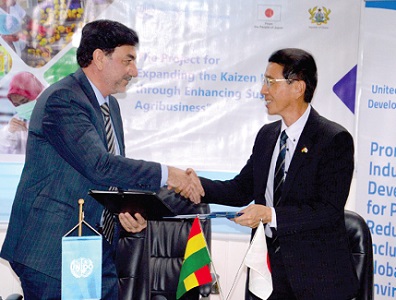 The grant was made possible through the United Nations Industrial Development Organisation (UNIDO) to provide MSMEs with technical assistance to improve their operations in Ghana’s economic and social development.

To be implemented in partnership with the Ghana Enterprises Agency (GEA), the three-year project seeks to support Ghana in scaling up its national Kaizen initiative to enhance the performance of MSMEs.

As a result, the Government of Japan and UNIDO have signed an agreement to implement a new project dubbed: “Expanding the Kaizen initiative by enhancing sustainable agribusiness”.

The Japan Ambassador to Ghana, Mochizuki Hisanobu, signed on behalf of the Government of Japan while the Representative of UNIDO in-charge of Ghana and Liberia, Fakhruddin Azizi, appended his signature for the UN agency. It was witnessed by the Resident Coordinator of the United Nations (UN), Charles Abani.

At the signing ceremony in Accra last Monday, Mr Hisanobu expressed excitement about Ghana’s willingness to learn from the best practices of what the Kaizen initiative had to offer to enhance the capacity of MSMEs and agri-business enterprises.

The Kaizen initiative is a Japanese management theory of continuous improvement to enhance quality and productivity.

Mr Hisanobu said fortunately for Ghana, the project would not be the first time the Kaizen initiative was being implemented.

Since 2012, the Japan International Cooperation Agency (JICA) has been rolling out technical cooperation projects by utilising the Kaizen initiative.

Mr Hisanobu encouraged Ghana to adopt the Kaizen ideas in its work culture, stressing, however, that it was also important to acknowledge the differences in the Kaizen styles.

In this regard, he said Ghana must look more broadly at how it could integrate Kaizen to suit its local needs and conditions.

“For example, Ghana has to look at how the Kaizen philosophy can help to propel the government’s flagship programmes of Ghana beyond aid and other initiatives such as Nation Builders Corps (NABCO), one-district, one-factory and Planting for Food and Jobs,” he said.

Mr Azizi said the project would support small businesses in their productivity and performance improvement to become more competitive, sustainable and resilient to challenges.

He said Kaizen was the right methodology, philosophy and mentality that would help Ghanaian enterprises become globally competitive.

He said the new project would enhance the capacity of the GEA and also reach out to hundreds of Ghanaian MSMEs to introduce Kaizen in their production site.

Mr Azizi said the project team would introduce digital tools so that the enterprises would be able to measure their production performance and improve in a sustainable manner.

“It has been developed in line with the country’s development priorities, and I am confident that it will contribute to the government’s ongoing efforts towards achieving its developmental objectives.

“I am honoured to say that our ties with Japan have become stronger in the last few years. This is the second project that UNIDO and Japan will launch this year in Ghana,” the UNIDO Representative added.