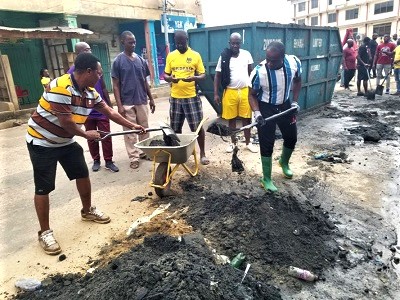 The occasion, which was attended by the Juabenhene, Nana Otuo Siriboe II, who is also the Chairman of the Council of State, sub-chiefs and people of the area, took place at the Yiadom-Hwedie Palace, the traditional residence of the Omanhene.

Hundreds of enthusiastic indigenes as well as other well-wishers thronged the palace to join the Omanhene, who was recently enstooled, to observe the Akwasidae.

The crowd, which was made up of people mostly clad in various traditional outfits, especially the Kente, Adinkra and other beautifully designed white clothes, took turns to greet and congratulate the Omanhene.

There was drumming, including the beating of the fontomfrom, singing and dancing of kete, adowa and mpintin, and the dancers performed to the best of their ability to entertain the gathering, especially visitors.

There was also a long retinue of chiefs, queens and abrempong, who took turns to greet the Omanhene who sat in state, amid the firing of muskets.

Last Saturday, as part of activities marking the Akwasidae, the Omanhene led the New Juaben South Municipal Assembly as well as the Office of the Member of Parliament for the area, Michael Okyere Baafi, to undertake a massive clean-up exercise in Koforidua, to improve the sanitation situation in the area.

More than 200 residents within the area who took part in the exercise. They desilted choked gutters and cleaned the streets.
Daasebre Boateng thanked the chiefs and people of the traditional area, especially those who supported his enstoolment, and called for unity to enhance the socio-economic development of the area.

He called on all and sundry to live in harmony with each other, so that Koforidua could regain its past glory.

“We cannot develop if we harbour ill will against each other.

“I’m for peace and development, so I entreat everybody who operates within the boundaries of New Juaben to ensure my dreams and vision become a reality,” Daasebre Boateng stated.

The Eastern Regional Minister, Seth Kwame Acheampong, for his part, commended the traditional authorities for joining the assembly to rid the area of filth.

The Municipal Chief Executive for New Juaben South, Isaac Appaw-Gyasi, reiterated the need for residents of the area to continue to participate in every clean-up exercise organised by his outfit.

That, he indicated, would prevent the people from contracting diseases such as cholera and malaria.