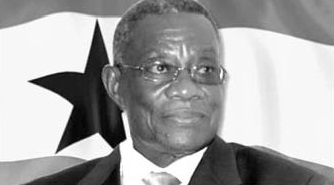 Members of Parliament (MPs) from both sides said Prof. Mills’s contribution to the socio-economic development of the country was enormous.

They also recognised his humility and respect for all.

The late President, who would have celebrated his 78th birthday yesterday were he alive, died on July 24, 2012, becoming the first President to have passed away while in office.

Making a statement to mark 10 years of his demise, the Ranking Member on the Foreign Affairs Committee of Parliament and MP for North Tongu, Samuel Okudzeto Ablakwa, enumerated the attributes and legacies of the late President Mills.

He described the late President as a man of integrity, modesty, punctuality, Godliness, compassion and a scholar.

“We knew that his true character was that of integrity. Public service with integrity came to him naturally. He was absolutely incorruptible and throughout his services to Ghana as a lecturer, tax administrator, Vice-President and President, never was he embroiled in any scandal, and that was a real achievement for the extremely sensitive positions he held,” he stated.

Mr Ablakwa said the late President Mills had a strict professional policy about gifts and even sought to extend same in his government by banning the acceptance of gifts, including Christmas hampers, which he considered inducement.

“It is, therefore, not surprising that during his tenure as President, independent assessors ranked Ghana high on integrity indicators,” he said.

He further said above all, the late President Mills was not ashamed to put God at the centre and had an unwavering belief that God ruled in the affairs of men and had no reservations of boldly professing his Christian faith.

Contributing to the statement, the Minority Leader and NDC MP for Tamale South, Haruna Iddrisu, said the late President would be remembered for maintaining the peace and unity of the country.

He said Prof. Mills, who was against profligate lifestyle and expenditure, placed a cap on the number of ministers to serve in his government and also had the least number of vehicles in his convoy.

Mr Iddrisu said it was during the tenure of the late President that Ghana also experienced the highest economic growth in the history of the Fourth Republic, as well as a single-digit inflation that was sustained during his tenure.

“We will forever miss him, as he was the one who gave an opportunity to some of the young people like me to serve in his government,” he stated.

He described the late Prof. Mills as a great listener and shared his memories of the late President, one of them being that he and some MPs met him on the issue of the payment of gratuity to MPs.

He described the late President as being open, frank and transparent in his dealings with his colleague politicians.

The NDC MP for Komenda/Edina/Eguafo/Abrem and brother of late President Mills, Samuel Atta-Mills, said his brother, who lived in the Regimanuel Gray Estate, a quiet neighbourhood, decided to move from there to the Castle, which was then the seat of government.

That, Mr Atta-Mills explained, the late President did because he did not want to inconvenience Ghanaians having to drive every day from his private residence to the Castle for work and back.

The NPP MP for Okaikwei Central, Patrick Yaw Boamah, for his part, said it was only great men who were given serious attributes, and during the late President’s tenure, he committed himself to ensure peace that earned him the title “Asomdwehene”, to wit “the king of peace”.

He said Prof. Mills, as a great sports person, championed the development of hockey in the country, leading to the construction of the Accra Hockey Pitch.

The NDC MP for Asunafo South, Eric Opoku, for his part, said it was during Prof. Mills’s tenure that Parliament passed a law to save nine per cent of all the revenue the country received from oil for future generations.

He also caused the establishment of the Ghana Stabilisation Fund to save 21 per cent of all the revenue the country received from oil and that percentage was to be saved against unforeseen contingencies.

The NPP MP for Nhyiaeso, Dr Stephen Amoah, said the late President was a peacemaker.

The NDC MP for Zebilla, Cletus Avoka, said when it came to sports, the late President was a master to nobody and extended his support to sports administration in the country.

Premature for EC to brief House on CI – Majority Leader