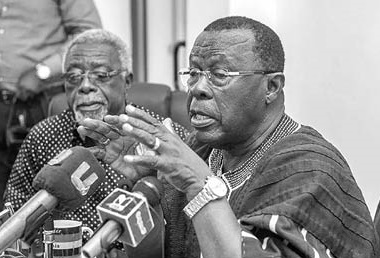 The Vice-Chancellor of the university college, Rev. Dr Paul Kofi Fynn, who disclosed this last Wednesday, also said the university would collaborate with the Ghana Journalists Association (GJA) to run refresher and training courses for journalists.

The offers, he explained, would give journalists the opportunity to further their knowledge and skills in the profession.

Rev. Dr Fynn made this known when the President of the GJA, Albert Kwabena Dwumfour, and some national executive members of the association visited him at the university at Agbogba, near Legon.

TheVice-chancellor used the occasion to invite the public to turn to the university college for quality education, with rates that had been revised downwards to improve access.

Rev. Dr Fynn said, for instance, that the fees for its Master of Business Administration (MBA) programme had been halved to allow for more access to good education, explaining that the COVID-19 pandemic had imposed financial hardships on people who wanted to further their education.

“We are not interested in money, per se; we are interested in serving the community and the people, so they have better education because education is an investment,” he said.

The Vice-chancellor said the government needed to allow private individuals to take up the running of some sectors of the economy, such as education.

He said the country was now spending over 75 per cent of its income on education, which was a problem.

He explained that the government’s involvement in the running of many sectors of the economy, including energy, water, transport and education, was not right, as it contributed to many of the wrongs going on in those sectors.

Rev. Dr Fynn, therefore, called on private entities to take up the management of such sectors to help the country grow.

For his part, Mr Dwumfour explained that the meeting was to honour the vice-chancellor’s call of the new executives and also build a collaborative bond between the GJA and the university.

The collaboration formed part of the vision of the GJA executive to facilitate scholarship opportunities for members of the association to further their knowledge and skills in the profession, he said.

Mr Dwumfour requested the Wisconsin University College to support the GJA in the area of capacity building and workshops for members of the GJA at the university.

He said the GJA had plans of instituting a summer school which would require a partnership between the two entities.

The summer school was expected to train some members of the association to enhance their knowledge, skills and professionalism, he said.

“We need a quota. At least if you can give the GJA 20 places a year, we will be grateful, as it will enable our members to upgrade themselves and develop their mental capabilities,” Mr Dwumfour appealed.

He also said a GJA Students Chapter would be established on all Wisconsin campuses to assure the university of the association’s commitment, as well as strengthen their relationship.

The GJA President later told journalists that the association would soon start its media tour and working visits to corporate partners and diplomatic missions after an orientation retreat in the coming weeks.

The meeting also included a tour of the Wisconsin campus, during which several facilities were shown to the media personnel.

The Wisconsin University prides itself in practical teaching and thus has various centres that allow students to have a real life experience of the theoretical knowledge they acquire.