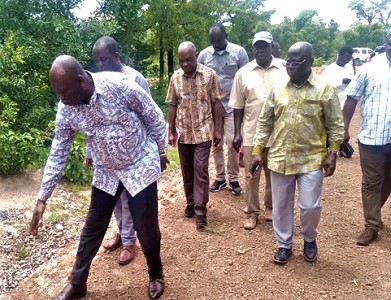 The government has secured a $100-million World Bank funding support for the implementation of phase two of the Ghana Productive Safety Net Project (GPSNP).

The project is being jointly implemented by the Ministry of Local Government, Decentralisation and Rural Development (MLGDRD) and the Ministry of Gender, Children and Social Protection (MoGCSP).

A Deputy Minister of the MLGDRD, Collins Augustine Ntim, made this known at the end of a two-day tour of some beneficiary districts in the Upper East Region last Friday.

The MLGDRD implemented the production inclusion aimed at providing sustainable income-earning opportunities for beneficiaries through the promotion of micro-enterprise and livelihood support and the LIPW aimed at providing short-term employment through the execution of public projects, such as small earth dams, feeder roads and community plantations.

The first phase of the project, started in 2019 and executed by the MLGDRD and expected to be completed by October 31, 2022, benefitted 80 districts nationwide, which have seen the provision of skills for 21,108 beneficiaries in 331 communities.

Also, start-up grants of the cedi equivalent of $215 per person have been presented to 21,108 beneficiaries to establish and run their own small-scale businesses, as well as the construction of 64 feeder roads, totaling 251.6 km, in rural areas.

Additionally, as part of the project, 80 small earth dams have been constructed to boost farming; 2,2022 hectares of plantations established, 11.4 million cashew, oil palm and coconut seedlings distributed in support of the government’s Planting for Export and Rural Development (PERD) programme, among others.

The second phase, a three-year project which will end in 2025, will reach out to 100 municipal and district assemblies (MDAs), with a target of 30,000 beneficiaries to establish enterprises under the PI component and the construction of 240km of feeder roads.

Furthermore, 80 small earth dams will be constructed in selected deprived farming communities to shore up agricultural production, as well as the establishment of 1,900 hectares of plantations.

Mr Ntim, accompanied by some officials of the ministry, toured Builsa North, Builsa South, Tempane, Garu and Pusiga in the Upper East Region and Mamprugu Moanduri in the North East Region.

The team inspected small earth dams and feeder roads and supervised the handing over of start-up grants to some beneficiaries under the PI component to establish their own trades to better their lot.

He noted that the government had, since 2017, continued to implement a number of life-transforming projects tailored towards addressing poverty among rural dwellers to enable them to live dignified lives in society.

He said “interventions such as the Planting for Food and Jobs, PERD, GPSNP, among others, were strategically introduced to create jobs and end particularly the poverty cycle among a section of Ghanaians.

“The GPSNP is a pro-poor project primarily intended to address the poverty levels among residents in beneficiary MDAs,” he said, noting that “the focus is to create jobs for the people to earn some income to improve their standard of living”.

Mr Ntim, who is the Member of Parliament (MP) for Offinso North in the Ashanti Region, hinted that the ministry was considering stocking all the small earth dams constructed under the project with fingerlings to provide additional income for residents of the beneficiary communities.

He said “the ministry, together with the Fisheries Commission (FC), will team up to stock the dams with fish to address malnutrition among the people, particularly children in the beneficiary areas”.

On the construction of the feeder roads, he commended the residents for undertaking the project through their own labour and urged the Ministry of Roads and Highways to consider adopting public works in maintaining feeder roads, instead of reshaping them, which did not last long.

For his part, the DCE for Tempane, Issaka Anabida, thanked the government for the project, as it would improve the income levels and welfare of the extremely poor in the beneficiary MDAs.