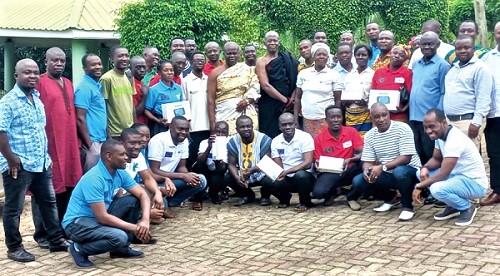 Known as the ‘Hybrid Community-based Monitoring System’ (HCMS), the mobile application is currently available on Android operating system and enables the farmers to keep track of the trees planted on their farms and also monitor their growth.

It is also to help the smallholder farmers and community to ensure continuity of conserving biodiversity, building climate resilience, and reducing emissions from land-use changes in the Sui Landscape along the Sui River enclave.

The monitoring tool was to empower the farmers to collect data and use the same decision-making process, combining remote and on-the-ground data gathering tools for data management and reporting.

At a ceremony to hand over the tools to the farmers and the community after six months of piloting, the Senior Associate in charge of Monitoring and Evaluation at Rainforest Alliance, Alvin Adu-Asare, said tree registration formed part of the projects being implemented by the organisation in the region and the tool was to help the farmers have well-documented data on the trees.

According to him, it had been observed that most of the farmers, who have planted trees on their cocoa farms as part of the reforestation programme, were unable to show any evidence of ownership of those trees.

This, he said, had led to many of them losing interest in the programme as they forfeited trees to the forestry commission.

As part of the efforts to streamline the process of tree registration and also monitor the success rate of trees planted within the area, the app was developed to keep track of the trees and make the process error free.

“We felt that it was important to bring in a digitalised system so that the farmers themselves can go out there and collect the data in a very simplified and seamless way.

“Once the data is collected, it can be stored in the cloud server and displayed on a dashboard on the internet and everyone can have access to it,” he said.

“HCMS will have the rigour to support communities to monitor forest and landscape performance in a way that is science-driven, credible, user-friendly and guarantees the integrity of data and will serve as a motivation for community involvement and the business model for investment,” he explained.

Previously, Mr Adu-Asare said, the records were kept in books and also error-ridden which made it difficult to access data.

With the new app, he said the paper trail had been cut off and the information on data could easily be accessed via the internet thus making it easier for decision and policymakers to easily access data from the area.

He said the data collectors had been provided with tablets and large screens which would be mounted in the offices within the communities where the progress of the trees and state of the forest reserve could be projected for all to know.

During the pilot programme, he said over 900,000 trees were recorded and believed that the app could be useful in tracking the progress and success rate of trees planted during the Green Ghana Day.

The app was funded by the Swiss Secretariat for Economic Affairs through the ISEAL technology fund.