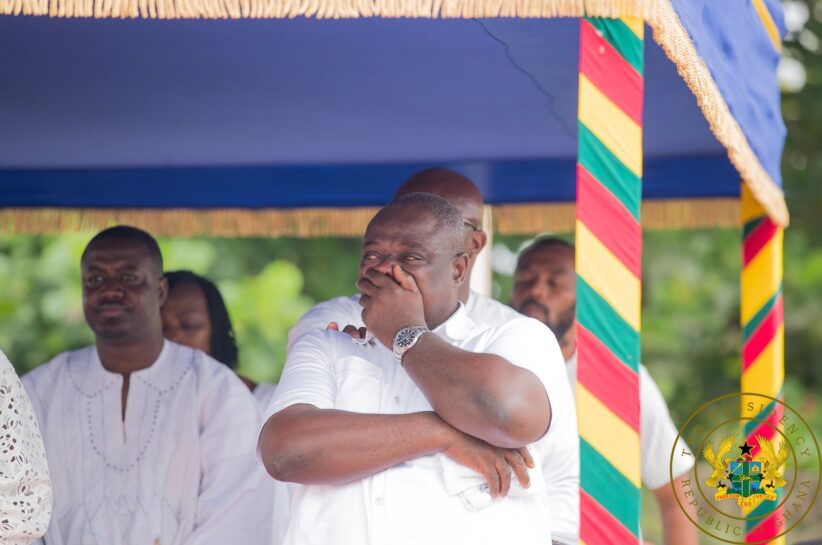 Samuel Koku Anyidoho, the founder of the Atta-Mills Institute has reacted to criticisms that he has arrogated the name of former President John Evans Atta-Mills to himself without recourse to his [Mills] family.

He has also been accused of engaging with the government to refurbish the Asomdwee Park, the final resting place of the late President without recourse to the family of Professor Mills.

In a radio interview Monday morning [July 25, 2022], Anyidoho dismissed the criticisms and said while former President John Dramani Mahama was in office [July 24, 2012 to January 6, 2017], he pleaded with him [Mahama] to erect a tombstone on Mills’ grave and put the Asomdwee Park in a proper state but he was ignored.

He said normally, when a person passes on in Ghana, the family erects a tombstone in the first year memorial, but in Mills’ case, that was not done. There was no tombstone on his grave.

Besides, the Asomdwee Park where he was buried was left in a bad state.

He said after four and half years of President Magama’s tenure, that was not done.

When he (Anyidoho) initiated moves to plead with President Nana Addo Dankwa Akufo-Addo when he succeeded President Mahama in 2017 to erect the tombstone and rehabilitate the Asomdwee Park, members of the opposition National Democratic Congress (NDC) told him to wait till Mahama was in power again so he could do it.

He claimed he was told it was unacceptable and it will amount to desecration if he did not wait for former President Mahama to do it.

In the radio interview with Accra based Oman FM monitored by Graphic Online, Mr Anyidoho commended President Akufo-Addo for agreeing to his request for the state to rehabilitate the park to a status befitting the stature of the late President Mills.

He gave an assurance that he would ensure the regular maintenance of the park.

He said that is why he has decided not to react to many of the accusations since it was not really coming from the family as a collective.

The refurbished Asomdwee Park, the final resting place of the late former President J.E.A. Mills, was inaugurated on Sunday [July 24, 2022].

Others are the construction of an entrance for the public and VIPs, the paving of the 50-metre walkway to and around the tomb, the laying of porcelain tiles and the landscaping of the area.

The inauguration coincided with activities to commemorate the 10th anniversary and thanksgiving service for the passing of the former President on July 24, 2012 and the consecration of the Asomdwee Park, which is about 200 metres away from the Christianburg Castle at Osu in Accra.

The ceremony was attended by the President, Nana Addo Dankwa Akufo-Addo; the Vice-President, Dr Mahamudu Bawumia; government officials; some Members of Parliament and the Diplomatic Corps, and some personalities who served in the Prof. Mills administration, including Rojo Mettle-Nunoo, Baba Kamara, E. T. Mensah and Antwi-Boasiako Sekyere.

Wreaths were laid in remembrance of the late Prof. Mills.

President Akufo-Addo laid one on behalf of the government and the people of Ghana; the Presiding Bishop of the Methodist Church, Ghana, Most Rev. Dr Paul Kwabena Boafo, laid one for the clergy, while Koku Anyidoho laid for the Atta Mills Institute.

Inaugurating the park, President Akufo-Addo said it was important to accord the late former President respect and honour.

He said it was not right that the park was allowed to deteriorate considerably over the years since his burial in 2012.

On that score, he expressed delight that the Asomdwee Park had been elevated to a status befitting the final resting place of a former President.

Giving a background to the renovation, the President said some time after becoming President, he became aware of the “sad state of the Asomdwee Park” and, in 2020, he received a request from the Atta Mills Institute, led by Koku Anyidoho, for assistance from the government to rehabilitate the place.

“I agreed, and, subsequently, I instructed the Coastal Development Authority to undertake a thorough rehabilitation of the park, with the close co-operation of the institute,” he added.

President Akufo-Addo said his decision to have the Asomdwee Park refurbished was backed by an open and clean mind.

“I did so with that objective solely in mind, and not to exploit or take advantage of any so-called divisions in the political party to which he (Prof. Mills) belonged. Those alleged divisions are not of my making and do not, in any way, inure to my benefit,” he said..

He noted that there had also been unfortunate accusations levelled by some people against the government over a supposed desecration of the tomb of the late President in the process of rehabilitating the park.

“Nothing could be farther from the truth, and it is good to note that these false, malicious statements have been firmly dispelled and debunked by the Coastal Development Authority, through its CEO, Mr Jerry Ahmed Schaib, in a public statement under his hand,” he added.

The President described the late former President as his contemporary at the University of Ghana, with both of them being members of the Legon Hall.

He said they also played in the same university football team, but, “as fate would have it, we ended up belonging to and leading different political organisations”.

Preaching the sermon, the Presiding Bishop of the Methodist Church Ghana, the Most Rev Dr Paul Kwabena Boafo, said President Mills lived a worthy life of humility, selflessness and forgiveness and touched the lives of many people.

He said though Prof. Mills no longer lived with the living, his good deeds were being remembered and celebrated.

He urged Ghanaians to also live lives devoid of corruption, insults and indiscipline so that they would help in the development of the country and also be remembered when they passed away.

Prof. Mills was the third President of Ghana, having served previously as Vice-President under former President Jerry John Rawlings from January 7, 1997 to January 7, 2001.

After completing Achimota School, the late Mills continued his education at the University of Ghana, where he received a bachelor’s degree in Law and proceeded to obtain a professional certificate in Law in 1967.

He left Ghana to pursue his postgraduate education in Law abroad. While studying for his PhD in Law at the prestigious School of Oriental and African Studies (SOAS) in London, Prof. Mills earned a Fulbright scholarship to attend the Stanford Law School in the United States of America in 1971.

He was awarded his PhD at the age of 27.

He was the presidential candidate of the National Democratic Congress (NDC) in the 2000 and 2004 presidential elections but lost on both occasions to former President John Agyekum Kufuor.

However, in the 2008 presidential election, Prof. Mills won to become President.

In 2011, he was elected by the NDC to lead the party in the 2012 presidential election, but it did not come without any challenge.

Unfortunately, he could not complete his full first term in office, as he died on July 24, 2012, less than five months to the elections.

Ghana to revert to May/June WASSCE