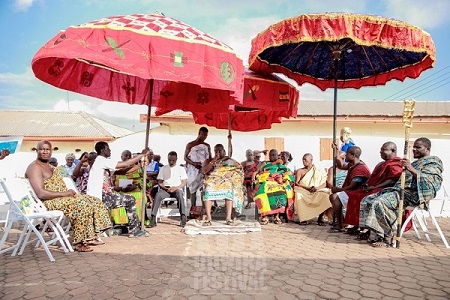 The 2022 edition of the Akuapem Odwira Festival has been launched.

The festival, which commemorates the victory of the Akuapem people at the great Akantamansu war in 1824, also seeks spiritual purification, unity, cultural revival, community development, political stability and promotion of tourism.

The launch, which took place in Accra last Friday, was spearheaded by the Akuapem Traditional Council with support from Ghana Tourism Authority (GTA), Beyond the Return Secretariat and other corporate entities.

Activities to be undertaken include clean up exercises, lifting of ban on some activities, settling of disputes, day of mourning, feasting and a grand durbar.

Symbolically unveiling the festival, the Akwamuhemaa of Awukugua, Nana Afua Onyaneb, stated that for many decades, the festival had exhibited the country’s colourful, vibrant and diverse cultural expression, bringing together people from all walks of life to celebrate themes of victory, gratitude and harvest, in unity.

“We urge Ghanaians to climb up to the Akuapem mountain and enjoy themselves at this year’s Odwira but not to come and fight or cause unnecessary trouble,” she said

On the theme, “Unity in our Heritage to Foster Sustainable Development,” this year’s event is scheduled to come off from September 12 to 18.
Nana Onyaneb said the people of Akuapem were once again ready to share their rich cultural heritage with the rest of the world at the Odwira Festival.

On the significance of the festival, a broadcaster, Nana Odei Ampofo said the festival was celebrated to affirm issues that were partly religious and political.

He said it dramatises Akuapem sacred myths, legends and specific historical episodes such as those which took place during the great Akantamansu War of 1824.

The Director of the Beyond the Return Secretariat, Annabelle Mckenzie, said the diaspora was always ready to support the country to develop all sectors of the economy.