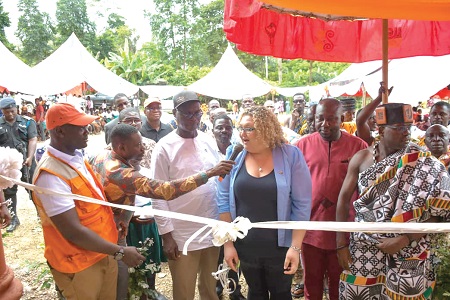 The World Vision Ghana (WVG), through the support of the Direct Aid Programme of the Australian High Commission in Ghana, has constructed a three-unit classroom block for the Aniantentem community in the Upper Denkyira West District.

The school block is to solve the problem of access to education for the 200 children in Aniantentem and its surrounding communities.

Hitherto, children, as young as four years old, had to walk for about eight kilometres to Dankwakrom, the next community, in order to access education.

The building is, therefore, to provide a decent and accessible educational facility to the kindergarten and lower primary pupils.

Speaking at the inauguration of the school block, the National Director of WVG, Dickens Thunde, said the organisation was a child-focused one with the primary objective of protecting the rights of children and providing quality health care, quality education, water and sanitation as well as hygiene and livelihood security.

That, he said, had compelled some of the children to drop out of school, while others became truants and those who were unable to walk the long distance, waited till they were of age before going to school.

Mr Thunde said the organisation organised the community to start a self-help project to put up a school close to the community and solicited for support from the Australian High Commission to complete the project.

He was thus grateful to the High Commission, the district assembly and the Ghana Education Service for the various roles they played in ensuring that the project came into fruition.

The Upper Denkyira West District Director of Education, Frank Kow Hayford, also commended the Australian High Commission for the support and the WVG for leading the way to secure funding for the school project.

He said the school block would not only improve on school enrolment but also bring education to the door steps of the community as they would not have to walk long distances to access education.

Mr Hayford said it would also reduce truancy and encourage more parents to send their children to school at the right age and not to wait until they were old.

A representative of the Australian High Commissioner, Harry Williams, said Australia considered education as one of the pillars of society and did not hesitate to fund the project when it was approached.

She said the project would give the children a solid foundation to education and enable them to discover their potential.