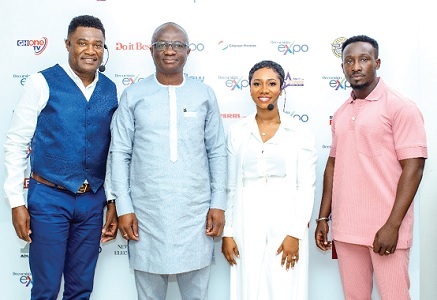 A festival to exhibit and celebrate the works of talented interior and exterior designers and decor specialists across the globe has been launched in Accra.

The festival also seeks to create a platform for designers and industry players to connect, network, learn and be inspired by the unique and beautiful largely made-in-Ghana products that will be exhibited.

Dubbed: the DecorSign Expo Festival, it will be an annual event during which a community of architects, designers, manufacturers and producers will showcase their works as part of efforts to promote the country as a lead global design hub.

The maiden event is scheduled for the Fantasy Dome in Accra in November this year and will host activities such as seminars, classes, exhibitions, emerging designers’ sessions, among others, in a bid to create a positive impact in the industry.

The launch, which took place last Friday, was attended by the Deputy Minister of Works and Housing, Abdullah Abanga; the Deputy Head of Corporate Affairs, Ghana Tourism Authority (GTA), Kofi Attah Kakra; the Manager of ‘Beyond the Return’, Anabelle Mckenzie, and other supporting partners.

According to the Creative Lead and Founder of DecorSign Expo, Mandy Louis, the expo, which would be the first of its kind in the country, was being established as a hub for all things interior and exterior in the real estate and architectural sectors of the country’s design industry .

“We want to create a platform where all service deliveries in the value chain can converge to learn new ways of doing things and exhibit their works, while experiencing the new evolution and technology in the space to connect across the globe,” she said.

Ms Louis further said the festival would inspire, motivate and propel creativity among industry players, while assuring its audience of “an intrinsic part of daily life immersed in beauty and class for global interaction”.

Mr Abanga said his outfit would contribute to the growth of the industry through the implementation of policies to provide land, tax incentives, infrastructure and other facilities to enable real estate developers sell at affordable prices.

For his part, Mr Kakra of the GTA said initiatives by the authority, such as the Year of Return and Beyond the Return, which had contributed in the promotion of culture and tourism, would support the successful take-off of the DecorSign Expo Festival.

“In a country where tourism is one of our greatest assets, being part of the expo will not only increase the number of tourist visits but also improve on the lives of the people through job creation, including showcasing the creativity of our designers,” he added.