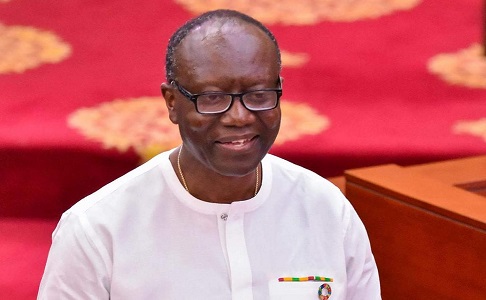 The government mobilised GH¢93.7 million revenue from the Electronic Transfer Levy (E-Levy) in the first two months of implementation.

The amount, mobilised in May and June this year, was about 93.59 per cent lower than the GH¢1.46 billion target set in this year’s budget.

Due to this, the government has revised the revenue target for the levy from the initial annual projection of GH¢6.96 billion to GH¢611 million in the Mid-Year Fiscal Policy Review released last Tuesday.

From the revenue side, data from the fiscal policy review indicated that the lower-than-targeted outcome reflected the performance of almost all the revenue lines.

“Total revenue and grants consisting of domestic revenue, tax revenue and other major revenue lines churned out lower than projected, after yielding GH¢37.8 billion in the first half of the year, from the target of GH¢43.4 billion,” it said.

“This mirrors a trend that has bedevilled the economy since the beginning of this year,” the revised fiscal policy position said.

Presenting the 2022 mid-year budget review last Monday, the Minister of Finance, Ken Ofori-Atta, said the government had seen some major shifts in its budget assumptions that had led to reduced revenues, increased interest payments and changes in interest and exchange rates.

He explained that the government, in the 2022 budget, committed itself to chart a course towards growth and fiscal sustainability and that the Mid-Year Fiscal Policy Review reasserted that commitment.

The Finance Minister said the government was committed to staying within the appropriation for 2022.

“In spite of the underperforming revenues and strong external headwinds, we are not seeking additional funds in this Mid-Year Review,” he said.

“We are determined to efficiently use the windfall from the upstream petroleum sector to make-up for our revenue shortfall and aggressively improve our revenues even as we rationalise expenditures,” Mr Ofori-Atta said.

The Director of the Institute of Statistical, Social and Economic Research (ISSER) of the University of Ghana, Prof. Peter Quartey, ahead of the mid-year budget review, called on the government to review the E-Levy to make it cheaper for more Ghanaians to contribute to it.

He said a revised collection rate from 1.5 per cent to 0.5 per cent, intensified education and accompanying measures would encourage compliance and narrow the revenue generation gap recorded in the first quarter of the year.

He explained that most Ghanaians were evading the levy because of the high rate, limited education and loopholes associated with the structure of the levy.

Prof. Quartey said a cheaper and well-structured E-Levy would rope in more people who had to pay but were not doing so.

“The E-Levy rate should be reviewed downwards and education intensified to get more Ghanaians to pay the tax, so that we can shore up our revenue and block the loopholes,” he said.

However, the Governor of the Bank of Ghana (BoG), Dr Ernest Addison, at a press conference last Monday, said it was not yet time to scrap the E-Levy, in spite of its failure to yield the desired results.

The governor said that certain exemptions granted by the levy could be responsible for the low revenue mobilised so far, hence with time it would perform better.

“I do not think it is time to scrap E-Levy. Discussions that I have been privy to have been on the level of exemptions granted under the levy and its law,” Dr Addison said.

“So, I know there is some work which is currently ongoing to relook at those exemptions; and hopefully, when that is completed, the levy will bring in more resources than currently,” he said in answer to a question on whether it was ripe to scrap the three-month old levy.