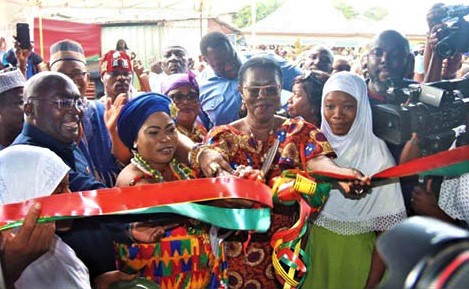 The Vice-President, Dr Mahamudu Bawumia, has inaugurated a newly constructed Islamic Community School at Tunga near Dansoman in Accra.

The six-unit classroom complex also has washrooms, staff room and an additional room to be transformed into an ICT laboratory later.

Funded through the Zongo Development Fund (ZDF), the project was spearheaded by the Member of Parliament (MP) for Ablekuma West, Ursula Owusu Ekuful.

Dr Bawumia said the government had, through the fund, also initiated the construction of model senior high schools in each of the 16 regions and was working assiduously to ensure the commencement of three of the schools this year.

He said the government had initiated about 300 development projects comprising educational and health infrastructure as well as skills training and educational grants for Zongo communities and inner cities across the country.

He said the projects were aimed at bridging the gap in education, health care as well as improving sanitation, visibility, ambience and security in Zongos and inner cities.

“The government has not only implemented a comprehensive development of educational infrastructure in Zongo communities but also intervened positively by improving health facilities, sanitation and human resource development through skills training and educational grants,” he said.

Vice-President Bawumia said Zongo communities were indispensable stakeholders in the determination of a comprehensive and inclusive development in the communities, stressing, therefore, that the inauguration of the newly built school was a clear demonstration of the commitment of the government to fulfil such objectives.

Giving the breakdown of the 300 projects, the Vice-President said out of the construction of 19 community sports and social centres, 10 had been completed while 35 out of the total of 65 six-unit classroom blocks had also been completed.

On the supply of basic school furniture, he said 2,050 unit dual desks had been given to over 30 educational institutions with 2,406 streetlights supplied and installed in over 40 communities.

Again, he said, nine out of a 10-seater 17 institutional toilets, had been completed while 73 out of 96 mechanised water systems had also been completed.

The upgrading of two maternal and child health facilities, according to Dr Bawumia, had all been completed together with the construction of four community drains out of which three had been completed.

Throwing light on the deprivation and lack of development in Zongo communities, Dr Bawumia said those were the issues that “the government of the New Patriotic Party, under the visionary leadership of Nana Addo Dankwa Akufo-Addo, was determined to address in a sustainable, comprehensive and equitable manner.”

To that end, he said, expanding access to quality and relevant education was pivotal to the transformation the government was determined to engender in Zongo communities through the fund.

“Indeed, since Ghana attained independence, no budget has ever been deliberately allocated for the development of Zongo communities. The establishment of the fund dedicated to those communities was indisputably unprecedented and that the construction of this impressive educational complex and its ancillary facilities clearly underscores our commitment to leave neither nook nor cranny in our efforts to expand access to quality education, particularly in Zongo communities,” he emphasised.

The Chief Executive of the Zongo Development Fund, Dr Arafat Sulemana Abdulai, reiterated the commitment of his outfit to serve the people in the over 3,000 Zongo communities throughout the country and said the fund would, among others, continue to support health, education, and skills training.

Dr Abdulai, therefore, called on the people of Zongos and inner cities to appreciate the effort of government, particularly the nondiscriminatory manner it was distributing the development projects.

For her part, the Member of Parliament (MP) for Ablekuma West, Mrs Ursula Owusu Ekuful, emphasised that the construction of the Islamic school was funded by the ZDF and not by any NGO.

Mrs Ekuful added that the edifice was a manifestation of the commitment of the government to develop Zongos and inner cities through the fund.

She expressed the hope that the new structure would ensure quality education in an improved atmosphere for the pupils.

The MP further expressed gratitude to the Zongo Development Fund, the contractor and the people of Tunga for their support in making the project a reality.

She also assured the people of Tunga and the constituency of her readiness to upgrade the children’s park in the area into an astro turf.