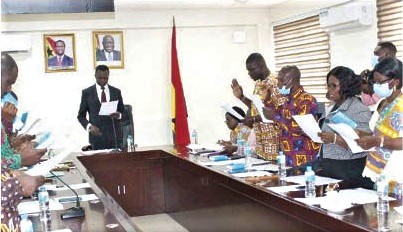 The Ghana Tertiary Education Commission (GTEC) has said the commission is to begin the evaluation of all 46 colleges of education in the country as part of efforts to convert some of them into independent universities.

The Minister of Education, Dr Yaw Osei Adutwum, said the ministry was also doing more stakeholder consultations, especially with churches, to arrive at consensus for the realisation of the objective.

“The GTEC is in the process of evaluating the various colleges of education so that we can get Parliament to approve a project that will enable some of them to become independent universities either individually or in collaboration with a cluster of colleges,” he said.

The minister explained that the decision to elevate the institutions into independent universities was to expand their scope and also help deal with the high attrition rate of teachers.

Dr Adutwum said this at the inauguration of governing councils of 10 colleges of education in Accra last Tuesday.

They are Tamale, Kibi, OLA, Fosu, Holy Child and Peki Colleges of Education.

According to the minister, the policy of affiliating institutions with public universities was not the best way to go, saying that many colleges around the world had widened their scope to include engineering and economics to enable students contribute more to the growth of their respective communities.

He said if the country wanted to get to the gross tertiary enrolment ratio of 40 per cent by 2030, there was the need to improve the capacity of the colleges of education in the country.

Dr Adutwum further said that the board had the mandate to enhance quality teacher education by empowering teachers, adding that the council “should explore innovative ways of training teachers to become assertive and relevant”.

According to him, the colleges of education had witnessed significant growth over the years through their transition and transformation into degree awarding institutions.

The minister also said that colleges of education had a major role to play in the transformation of education in the country and, therefore, urged them to imbibe the tenets of patriotism and discipline in the students.

The various governing council chairmen pledged to deliver on their mandate and expressed appreciation to the President for the confidence reposed in them.

The members took both the Oaths of Office and Secrecy, administered by Dr Adutwum.

Tourism training school to be established in Accra

Over 19,752 citizens conferred with state honours