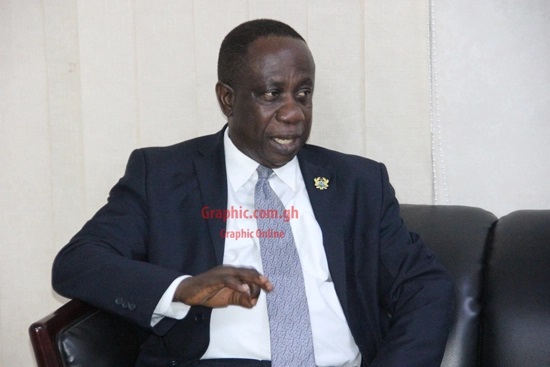 The Students Loan Trust Fund (SLTF) will from September this year begin the prosecution of persons who have defaulted in the repayment of their loans for over a 10-year period.

The affected persons will include all who have benefited from the loan but are yet to repay despite being gainfully employed now.

The Chief Executive Officer of the SLTF, Nana Kwaku Agyei Yeboah, who made this known to the Daily Graphic last Monday in an interview, said the Trust was compelled to resort to legal action as several reminders to the affected persons had been ignored and it was part of the efforts to meet its set recovery target of GH¢ 70 million, for this year.

“We consistently keep reminding people through their guarantors, text messages and other communication -emails, etc. as well as publish names and faces on our platforms and in the dailies.

“They have simply ignored all those and so we are resorting to the final action by sending the recalcitrant borrowers to court, prosecute them to get the money back.

“This month is the final grace period, if they still refuse to do the needful from all the reminders and prompts, September is prosecution time to recover the loans,” he emphasised.

The Students Loan Trust Fund Act, 820 (2011) prescribes various steps that the SLTF must take in the recovery of loans.

Among the prescribed steps are consistently sending reminders through emails, text messaging and also through their guarantors as well as the publication of pictures and details of defaulting borrowers in the national media.

Over the years, the fund has deployed many of the prescribed measures in loan recovery, but was yet to drag anyone to court for defaulting in repayment.

Mr Yeboah said since prosecution was one of the measures, the  SLTF had, therefore, resolved, in accordance with its Act, “ to begin prosecution of defaulters” to ensure that the scheme was sustained.

He explained that prosecution would specifically target only those who had refused to make any efforts to have an agreed repayment plan, particularly, beneficiaries whose repayment period of 10 years had elapsed.

Mr Yeboah  indicated that the SLTF had set aside the month of August as recovery month to sensitise people to the repayment of their loans.

“The SLTF sets aside one month in each year to educate the general public, particularly, beneficiaries of the loan scheme on the importance of loan repayment to the sustainability of the fund.

“The month is also used to disseminate information on the various repayment platforms available to borrowers. This year, the Recovery Month has been slated for August,” he said.

The SLTF CEO said with the introduction of the free senior high school programme and opportunity for more to continue to the tertiary level, the fund had seen an increase in the number of loan applications, which made recovery of due loans even more critical.

Also with the implementation of the “No guarantor” policy, “there has been an even greater increase in loan applications and SLTF offices across the country have been processing large volumes of applications. We therefore, need to recover the loans so that others can benefit.”

“Over the past few years, the fund has put in place a number of strategies to recover loans, including the introduction of several electronic payment platforms to afford convenience to borrowers in repaying their loans.“

On the significance of the repayment of the loans, Mr Yeboah said there was the need to run a fund that was solvent to justify the existence of the trust fund and “that depends on our ability to recover loans given to borrowers to keep it in operation”.

“Though we get other sources of funding from the GETFund, telecommunications tax and even the Government of Ghana, we also need to do our recovery.

“Repayment is thus very critical to our very survival. We need to get the money that we have given out to be able to support other students who will require that kind of support,” he emphasised.

Mr Yeboah said the SLTF, this year, opened two new regional offices, one in Accra and the other in Kumasi, to focus exclusively on loan recovery.

He explained that the trust fund recovered loans given to students all-year-round and using the month of August to educate people on repayment did not mean that only August was being used to recover loans taken by borrowers.

“Recovery of loans is an all-year-round activity, but a month is set aside for an aggressive campaign and sensitisation during when we go out there to remind people of repayment.

“We do this because sometimes, people tend to forget, and may not even remember the payment points.

“For some time now, we have carried out the exercise in August, so this year we are going round again with an intensified educational campaign to get defaulters to pay back loans they had taken,” he explained.

The SLTF CEO maintained that apart from recovery of the loans to enable other students to benefit, the loan repayment would also help borrowers to build their credit history which was very important as the country became digitised.

The trust fund, he said, would report to the credit bureau all payments that would be made and that it would also inform the banks, and added that “as you are paying and we are reporting, you are getting good credit history.”

He said the trust fund was not demanding the upfront payment of all the money people owed it, and that people who were hard up could visit it to discuss and agree on a convenient repayment plan.