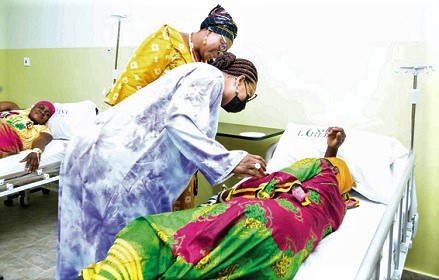 The newly built Lordina Foundation Maternity and Children’s Ward at the Bole District Hospital has been operationalised, and started receiving patients.

This follows the provision of the required soft furnishings, additional medical accessories and supplies by the former first lady and president of the Lordina Foundation, Lordina Dramani Mahama.

Other items handed over by Mrs Mahama to enable the hospital to start using the new facility were a mobile ultra-scan machine, blood pressure monitors, autoclaves for the sterilisation room, a vaccine refrigerator, trolleys for the theatre and delivery rooms, baby bassinets, manual vacuum extractors, delivery and caeserean sets, and oxygen monitors.

The Lordina Foundation also provided desks, chairs and a refrigerator for the doctors and nurses offices, lockers for filing and a reception desk with chairs.

Mrs Mahama, together with the district health and hospital management, went on a tour of the facility and interacted with some of the first set of patients that were admitted to the wards.

The traditional authorities in the area, urged the hospital management to ensure the proper maintenance of the facility.

Also present were the MP for Bole Bamboi, Sulemana Yusif, and officials of the Lordina Foundation.

Former President John Dramani Mahama and his wife, Lordina, constructed the 45-bed maternity and children’s ward for the hospital to celebrate the 30th anniversary of their marriage.

It is also fitted with a Kangaroo Mother and Child Care room, a recovery ward, delivery, and theatre rooms with two beds each and accessories, a sterilisation room, doctors consulting rooms, nurses’ stations, a records room with lockers, a linen room and a store.

Inaugurating the facility, former President John Mahama, who is a former MP for Bole Bamboi, said, “I am a very proud man and husband.

“I want to thank my wife, Lordina; her organisation, the Lordina Foundation; their partners, and our friends who supported us, and ensured that this Lordina Foundation Maternity and Children’s Ward is ready and on time for today’s handing over to the Bole community and the hospital.”