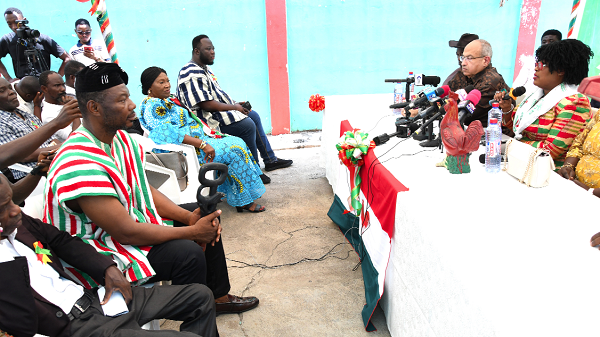 The Convention People’s Party (CPP) has urged the public to use the occasion of the Kwame Nkrumah Memorial Day to rally behind the party to fight for the ideals of the country’s first President.

It said the two major political parties, the New Patriotic Party (NPP) and the National Democratic Congress (NDC), had failed the country and the CPP was the party of choice to help turn the country’s fortunes around to benefit the ordinary Ghanaian.

Speaking at an occasion to celebrate Dr Nkrumah’s 113th birthday yesterday, the General Secretary of the party, Nana Yaa Jantuah, dispelled claims that the party was not united, adding that
“We are not disunited, we are united with one common front to ensure that CPP takes over the administration of this nation to change the ills meted out to Ghanaians”.

The Kwame Nkrumah Memorial Day is a statutory public holiday observed in the country to mark the birthday of Ghana’s first President, Dr Kwame Nkrumah, who was born on September 21, 1909 at Nkroful, near Axim in the Nzema East Municipality in the Western Region of the then Gold Coast, now Ghana.

It would have marked the 113th birthday of Dr Nkrumah if he were alive.

The General Secretary explained that it was time to reflect on the good deeds of Dr Nkrumah and collectively build and learn from the legacy he left behind.

She stated that the efforts Dr Nkrumah made to exert the dream of bringing independence to the country and to ensure a united continent should be enough reason for their founder to be remembered and celebrated annually.

Madam Jantuah called on Ghanaians, including its members that had left the party, to return for the sake of the love they had for their founder.

That, she said, would ensure that power was brought back to the party to enable it to bring redemption to the country backed by the ideals of Dr Nkrumah.

A member of the opposition NDC and former deputy Chief of Staff, Alex Segbefia, said Nkrumah’s quest to ensure development in the country was unmatched.

The party, he said, must resist any attempt to re-write the history of the country and the fact that Dr Nkrumah was the founder of the country.

He added that it was the duty of all to emulate the ideals of Nkrumah and collaborate to ensure peace on the continent.

“Unity does not mean leave your party but collaboration.

“Having a common sense of purpose is key and we must all endeavour to live in that direction,” he added.

The Communications Director of the PPP, Emmanuel Felix Kofi Mantey, in his solidarity message, emphasised the need for Ghanaians to understand the context within which Dr Nkrumah fought for independence

According to him, the former President fought for economic independence adding: “it is time to forget whatever we believe in and think about a force that can stand against vindictiveness; let’s go back to the basis and remember where we started from and help to improve the quality of life of the ordinary Ghanaian.

The Chairman of the party, Nana Akosua Frimpomaa, charged the members to help leadership build a party that was fortified for victory in the 2024 election.

“Let’s resolve all internal wrangling and let’s use his birthday to ignite the spirit of selflessness,” she added.