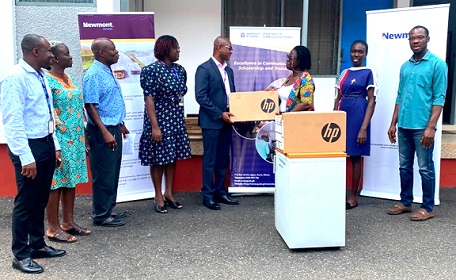 Newmont Ghana, a mining company in the country, has donated 10 laptops to the Department of Communication of the University of Ghana.

At a short presentation ceremony, the Director of Communications at Newmont Ghana, David Johnson, said considering the role the department played, it was proper to support the training of its students with some information and communication technology (ICT) equipment.

“Newmont is responsive to our stakeholder communities, but beyond that, as part of our corporate social responsibilities, we support institutions that are doing things that align with our values as a company,” he stated

Mr Johnson added that the company also had partnership with the University of Mines and Technology, Tarkwa.

So, now and then, when opportunities open up, we advertise and people with the requisite communication background can apply,” he added.

The Head of the Department of Communication Studies, Dr Abena Animwaa Yeboah-Banin, received the items on behalf of the department and expressed gratitude for the kind gesture shown by the mining company.

She noted that the laptops would augment that of ICT equipment in the department and also facilitate teaching and learning.

“We hold pride of place in the communications training space in Ghana and it comes because we put in a lot of effort in the training we deliver to our students, and these equipment would help in furthering that cause,” she said.

Dr Yeboah-Banin reiterated her earlier call to all the alumni of the department to contribute towards the further expansion of their alma-mater and to participate in the year-long series of activities earmarked to celebrate its golden anniversary.

Newmont produces copper, silver, zinc and lead. Its presence in Ghana includes the Ahafo mine in the Ahafo region and the Akyem operation in the Eastern region near New Abirem.

The company’s portfolio of assets, prospects and talent is anchored in favourable mining jurisdictions in North America, South America, Australia and Africa.

Newmont was founded in 1921 and has been publicly traded since 1925.

The company is seeking to establish footprints in other parts of Africa and is currently establishing its roots in Ethiopia and La Cote D’Ivoire.