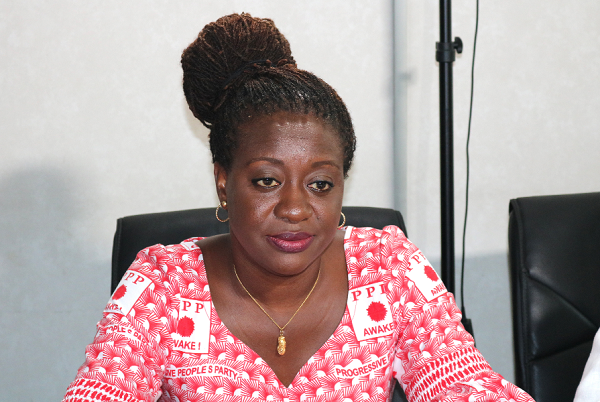 The Progressive People’s Party (PPP) last Saturday celebrated its 10th anniversary at Elmina in the Central Region with a commitment to break the duopoly of the New Patriotic Party (NPP) and the National Democratic Party(NDC).

The party, therefore, appealed to the electorate to rally behind it in the next general election to clinch victory to enable it to improve on its lot.

The 2020 presidential candidate of the PPP, Brigitte Dzogbenuku, made the commitment while addressing party faithful who converged on the Kobina Gyan Square at Elmina to celebrate the anniversary.

She said that “if you are one of those who realises that we need a third force, let me tell you, we are the third force we need. We have tried the other two – we don’t like the turn of events. Now the PPP has come of age” .

Ms Dzogbenuku encouraged the rank and file of the party to put their shoulders to the wheel and make the PPP the third force the country needed.

The 2020 presidential candidate indicated that the PPP was the only party determined to place governance at the doorstep of the people by allowing them to vote for their respective metropolitan municipal and district chief executives (MMDCEs).

Furthermore, she said the PPP was the only party that believed in constitutional review and change to give more meaning to good governance.

Ms Dzogbenuku said if the PPP was voted into power in 2024, it would tackle head-on issues concerning youth unemployment, social development and road infrastructure.

She expressed the preparedness of the party to ensure effective implementation of policies saying “this is better than empty party sloganeering, personal profit and political expediency”.

The Chairman of the Party, Nana Ofori Owusu, said it was time for all party faithful to put their shoulders to the wheel and make the PPP the third force that the country was looking for.

Nana Owusu said Ghanaians should reactivate their faith and commit themselves to bring the PPP to power.

He said the journey had not been an easy one but with determination it would work.

The First National Vice Chairman of the party, Felix Ograh, indicated that the PPP remained relevant in the Ghanaian political space and the most credible alternative to lead the country out of its current economic challenges.

He said the party’s agenda of rescuing the country by creating a just and disciplined society with passion for excellence could only be achieved, if the party was voted into power.

Mr Ograh, who is also the Chairman of the 10th Anniversary Planning Committee, explained that the party would reform state institutions including strengthening Parliament to perform its legislative duties effectively.

Attitudes that build a nation