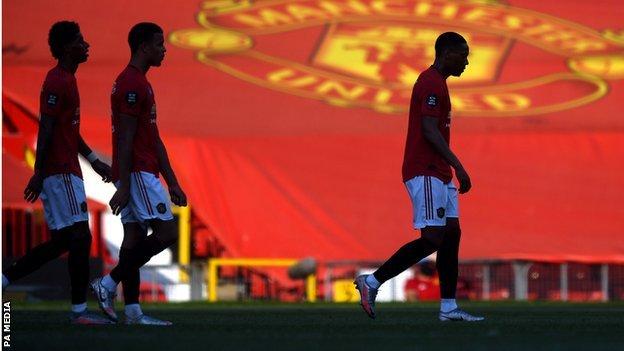 When Manchester United sold Romelu Lukaku to Inter Milan last summer, they were accused of having made a significant error and of leaving themselves short of goalscoring options.

When Ole Gunnar Solskjaer’s side won just two out of seven games at the start of 2020 and were six points below the top four – leading to the surprising signing of Odion Ighalo on loan from the Chinese Super League – their manager’s decision-making looked questionable.

But as United have improved this year, so have their front three. The forwards who started Saturday’s 5-2 thrashing of Bournemouth – Anthony Martial, Marcus Rashford and Mason Greenwood – have become goal machines, with 55 between them in all competitions.

They scored four against the Cherries – two for Greenwood and one each for Rashford and Martial.

This was the third time since Christmas they had all scored in a Premier League game, with one of the trio scoring twice on each occasion.

To underline their attacking prowess, United have scored five times or more on four occasions in their past 16 games. They only did that three times in the first 367 matches after Sir Alex Ferguson retired.

“How can you not be excited about him?” asked former England striker Ian Wright on BBC Match of the Day after Greenwood’s double.

United boss Ole Gunnar Solskjaer said the 18-year-old might be the best finisher he has ever seen.

United are two points behind Chelsea in the race for the top four but they are fifth, which will be enough for a Champions League place if Manchester City’s European ban is upheld. They are also still in the Europa League and FA Cup.

How do they compare with Europe’s best trios?

The United trio have scored more goals in all competitions this season than Liverpool’s feted front three of Mohamed Salah (21), Sadio Mane (19) and Roberto Firmino (11).

Only six of Europe’s top teams have got three players who have scored more than Rashford, Martial and Greenwood’s combined 55.

They are some way off Bayern Munich’s top three scorers’ total of 83 – Robert Lewandowski has netted 51, Serge Gnabry 20 and Thomas Muller 12.

Manchester City’s top three have 64 – although they do not all play at the same time. Sergio Aguero and Raheem Sterling have 23 each, with 18 for Gabriel Jesus.

RB Leipzig’s main three scorers have 60 – with 34 for Chelsea-bound Timo Werner, 16 for Marcel Sabitzer and 10 for Emil Forsberg.

But next are United’s three, joint with Juventus trio Cristiano Ronaldo (29), Paulo Dybala (17) and Gonzalo Higuain (9).

They are ahead of everyone else – including Liverpool’s front line (51) and Borussia Dortmund’s 48 (Jadon Sancho, Erling Braut Haaland and Marco Reus).

Lukaku has scored 25 goals for Inter this season, which would make him United’s top scorer – but Inter’s next two top scorers have only got a combined 22.

Atalanta (52) and Lazio (48) are among the other teams with prolific scorers who cannot match United’s trio. Real Madrid’s top three have only scored 38, with Karim Benzema (22) and Sergio Ramos (11) the only two to reach double figures.

If the trio can keep up this form, United might not need to sign another first-choice striker any time soon, despite reports they are keen to do so.

Greenwood is 18, while Rashford is only 22. Martial is the veteran of the group at the age of 24.

‘The best finisher I have seen’ – Greenwood’s dramatic rise

When Greenwood scored his first United goal – against Astana in the Europa League in September – Solskjaer said it justified his decision to let Lukaku and Alexis Sanchez join Inter.

But it has taken the teenager time to cement a place in the first-choice XI. Five of his seven league starts this season have come since February.

He has scored eight league goals (one every 115 minutes) this season. Only Michael Owen (twice), Robbie Fowler and Wayne Rooney have managed more in a Premier League season at the age of 18 or younger.

Greenwood, who turns 19 on 1 October, has scored the same amount of league goals Rashford managed before his 19th birthday.

He is some way below fellow teenage sensations Owen and Rooney, who scored 28 and 15 Premier League goals by their 19th birthdays. Fowler had managed 10.

Plenty of Greenwood’s minutes have come in the Europa League this season, with five goals in seven games only putting him one behind the top scorers.

“Mason is one of the best, if not the best, finisher I have worked with and seen,” said manager Solskjaer after the win over Bournemouth. “He is so calm. He knows where to finish if it is on the training ground, here or in his garden at home.”

“But we’re not getting carried away because he has these things in his locker that are top-drawer. He can get that extra half a yard which the top players do.”

“What an impressive player. He’s only going to get better and better.

“Greenwood is brilliant to watch and when you watch him off-camera you see the runs he is making, he’s demanding the ball. There’s a belief about him that he is good enough to play at this level.”

Martial and Rashford find their feet

Greenwood has the fewest goals in United’s front three – with Rashford and Martial on 20 each.

Both are enjoying their best goalscoring seasons in five years in the United first team – at a better goals-to-minute ratio than ever before.

Rashford has become more efficient. He only scored 13 of his 122 shots last season, compared to 20 from 113 efforts this term.

“They are exciting,” said Solskjaer. “We have players who provide chances for them but they have pace and skill.

“We have to build on that. There are many big games to come and we need more big wins because we know our goal difference isn’t the greatest.

“Confidence is sky high, you get energy and confidence by performances and results and we are getting that at the minute.”

The trio still have a long way to go though to join some of United’s great recent goalscorers.

The 2008 Champions League-winning team managed even more goals from their top three scorers. Cristiano Ronaldo (42), Carlos Tevez (19) and Rooney (18) managed 79 between them.