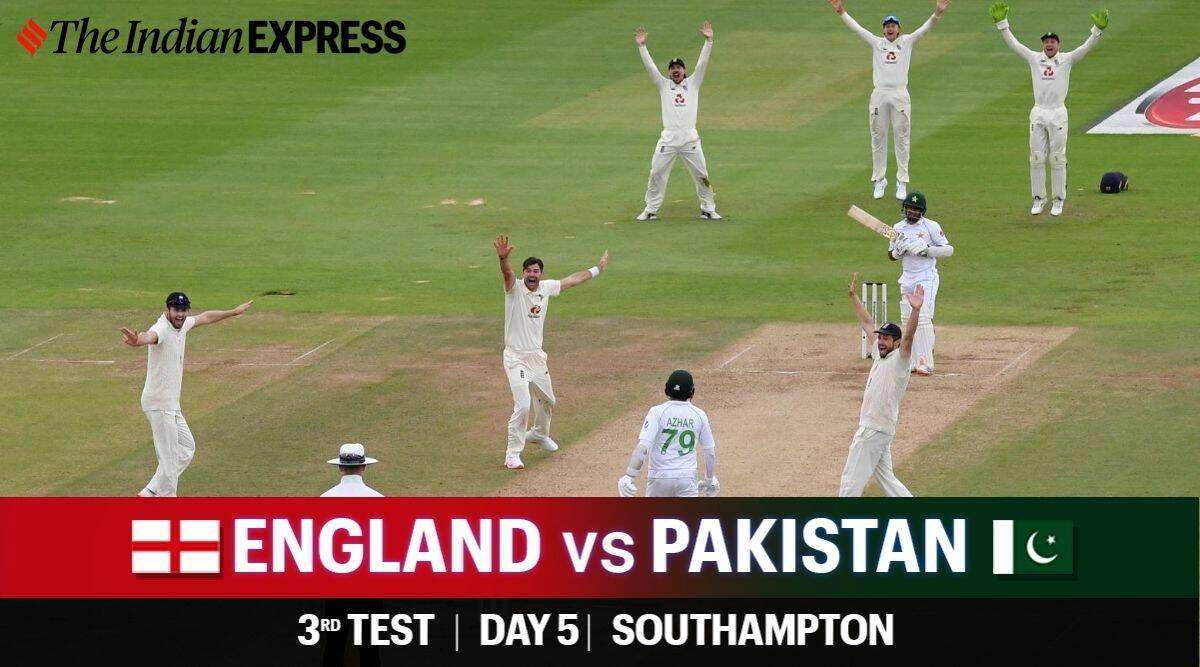 England had to settle for a draw in the final Test against Pakistan on the day James Anderson became the first fast bowler to reach 600 Test wickets.

Torrential rain prevented any play until 16:15 BST at the Ageas Bowl, all but ensuring the draw that left England with a 1-0 series win.

There was still the opportunity for Anderson’s moment of history, which came from his 14th delivery of the day when he had Azhar Ali caught by Joe Root at first slip.

Root himself also had Asad Shafiq held at short leg, Pakistan closing on 187-4 following-on in their second innings, 123 runs behind.

England still record their first series victory over Pakistan in 10 years, but remain third in the World Test Championship behind India and Australia.

Even if that new competition overcomes the obstacles of the coronavirus pandemic, England face a huge battle to reach the final.

In the meantime, the bio-secure summer continues when an entirely different England squad takes on Pakistan in a three-match Twenty20 series in Manchester, beginning on Friday.

The pandemic means England’s winter schedule is yet to be confirmed – they will definitely not play any more Tests this year – so it is unclear when 38-year-old Anderson would have have got another opportunity for his latest landmark had he remained stranded on 599.

As time was eaten up by the weather and the draw became more and more inevitable, the prospect of the historic moment was the only meaningful reason for play to begin.

It arrived when Anderson found some extra bounce, taking the shoulder of the fencing Azhar’s bat, with Root taking the catch in front of his face.

The Lancashire bowler got a hug from Root, a handshake from long-time new-ball partner Stuart Broad, then raised the ball to the few people in the ground – the great shame being that no spectators were present to celebrate.

The rest of the action, played out in a howling wind, was largely England hurrying through the overs to get to a point when a draw could be agreed.

Dom Bess and Root did the bulk of the work, Dom Sibley bowled one over of filthy leg-breaks, with Babar Azam helping himself to 63 not out.

This has been a unique summer, with international cricket made possible by the vision of the England and Wales Cricket Board and the willingness of touring teams to travel.

And while the bio-secure, behind-closed-doors matches have been incredibly important to the finances of the game in this country, England may reflect on their value for the development of this team.

The emergence of Zak Crawley, the performances of Sibley and the return of Jos Buttler’s batting form have all been signs of progress.

Before he had to miss the final two Tests for family reasons, Ben Stokes cemented his reputation as one of the finest batsmen in the world, as well as being one of the leading all-rounders.

The bowling picture is more complicated. Anderson and Broad continue to excel in home conditions, the former after denying speculation he might retire, the latter returning one of the best summers of his stellar career in response to being left out of the first Test.

With Anderson, Broad and Chris Woakes in their ranks, England will always have the weapons to take wickets on home soil, but they have perhaps learned little about their options for away Tests, with tours of the subcontinent and Australia pencilled in for the next two winters.

Bess is learning his trade as a Test spinner and the extra pace of Jofra Archer was only seen in fleeting moments. Mark Wood, also capable of express speed, played just one Test.

Overall, England emerged from two highly competitive series against West Indies and Pakistan with two creditable wins and have now lost only one of their past nine Tests.

But it is not just England players that have starred. West Indies’ Shannon Gabriel, Jermaine Blackwood and Jason Holder, and Pakistan’s Azhar, Mohammad Rizwan and Mohammad Abbas have all illuminated a Test summer that will be remembered for its distinctive circumstances.