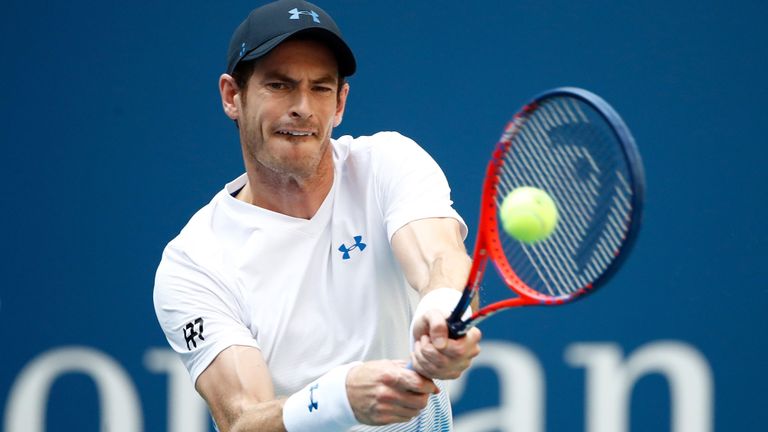 Britain’s Andy Murray earned his first win against a top-10 player since 2017 by beating Germany’s Alexander Zverev at the Western and Southern Open.

The 33-year-old Scot, playing his first top-level tournament since November after injury, won 6-3 3-6 7-5 against the world number seven to reach the third round in New York.

“It is a good effort to win that after not playing for a while,” said Murray.

Murray, ranked 134th in the world, will play Milos Raonic of Canada next.

Murray continues to defy the odds

Former world number one Murray, who had a second major hip surgery in January 2019, is again on the comeback trail after a long lay-off enforced by niggling injuries and the suspension of the professional tours because of the coronavirus pandemic.

After beating American wildcard Frances Tiafoe in the first round, he faced a sterner test of his fitness and form against 23-year-old Zverev.

Murray showed glimpses of his best in an impressive first set, when he used his court-craft and variety of shots to unpick Zverev’s game.

Murray’s level dipped midway through the second set as Zverev fought back to take the match into a decider, with Murray becoming annoyed at his failure to execute his shots.

He refocused to break for a 3-1 lead in the decider with a dipping cross-court winner, only for Zverev to show his resilience again by winning four games in a row to serve for the match.

However, Zverev’s major weakness has been his second serve and it is clear he has not solved that problem during the enforced break, producing five double faults as Murray claimed the final three games.

“I don’t think either of us played very well as we got closer to the finishing line. I’m glad to get through it.”

Djokovic battles through the pain to win

World number one Novak Djokovic fought through neck pain to secure a 7-6 (7-2) 6-4 win against Ricardas Berankis of Lithuania.

Djokovic, who needed treatment during the match, twice went down a break in the second set but broke back both times to go on and secure the win.

“It’s been four days. It’s not yet where I’d like it to be but it’s heading in the right direction.”

Meanwhile, second seed Dominic Thiem suffered a surprise exit as the Austrian was beaten by the 32nd-ranked Filip Krajinovic of Serbia 6-2 6-1.

The tournament is usually held in Cincinnati but was moved to Flushing Meadows to create a two-tournament safety bubble that also incorporates the US Open, which starts on 31 August.

Konta, 29, earned her first competitive victory since the WTA Tour restarted with a confident win.

Seeded eighth and given a first-round bye, she took the final 11 games to triumph 6-2 6-0 and reach the third round.

Konta produced a dominant performance in her first match since a straight-set defeat at the Lexington Open two weeks ago, where she felt light-headed after suffering from heart palpitations.

Konta said was not overly worried about the issue and she experienced no physical problems in the heat against world number 78 Flipkens.

From the start, Konta put Flipkens’ serve under pressure and broke twice in a five-game winning streak to clinch the opening set.

She continued to strike the ball superbly, dropping only seven points in a 24-minute second set.

Evans, 30, was looking to earn successive wins in a Masters event – the tier of tournaments below the Grand Slams – but struggled to cope with former world number three Raonic’s big serving in a 6-3 7-5 defeat.

Raonic has dropped to 30th after injury problems, but looked close to his best as he hit 23 aces.

Evans suffered a second defeat of the day in the men’s doubles, losing 7-5 6-1 alongside Belgium’s David Goffin against Croatia’s Nikola Mektic and Dutchman Wesley Koolhof.

In the women’s doubles, Britain’s Heather Watson and Magda Linette of Poland lost 6-1 6-3 to Americans Coco Gauff and Caty McNally.