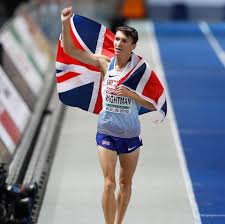 The Scottish middle-distance runner, 26, was third in Friday’s 1500m, taking more than two seconds off his personal best at 3:29.47.

That moved him up to second in the British all-time standings, above Steve Cram, Steve Ovett and Sebastian Coe.

“The one thing I don’t have is the medals and the actual world records times they’ve got alongside it. It’s just Mo [Farah] ahead now.

“They are guys that have done so much in our sport. They’re always the ones that we’re getting compared to as 800m and 1500m athletes.

“To actually go past them has really given me the confidence for next year to try and challenge for medals, because that’s what I really need aim for, to try and come home with some silverware.

“To be able to run under 3:30 is just mind blowing. To see a two rather than a three after the three minutes was just mad.”

Wightman won bronze for Scotland in 1500m at the 2018 Commonwealth Games and European Championship bronze in Berlin the same year.